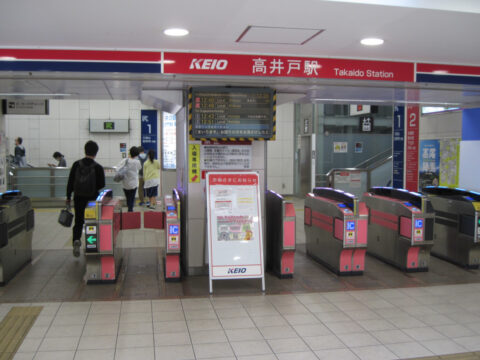 Today I will walk the continuation of Kanpachi in the south direction from Takaido Station. 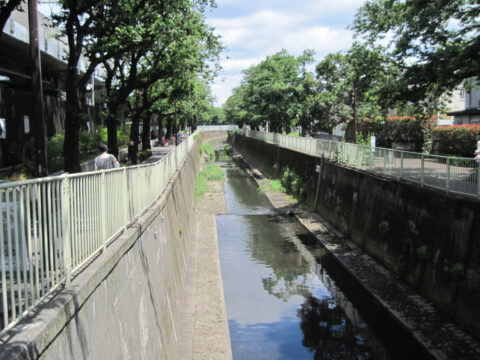 The Kanda River flows by the station.

It has been four and a half years since I walked along the Kanda River before. There was a newly built Shimotakaido Ozora Park just ahead, but I wonder what has happened since then. 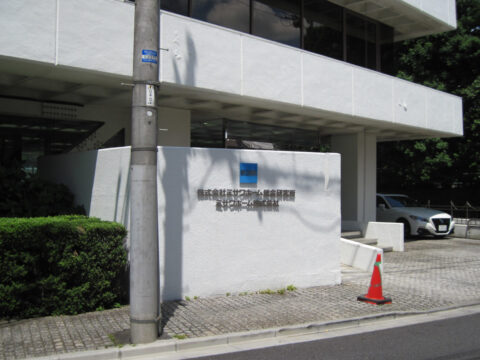 Suddenly, the Misawa Homes building appeared. Across Kanpachi, Misawa Homes are on both the left and right sides of the street. If Marunouchi is Mitsubishi Village, this is Misawa Village. 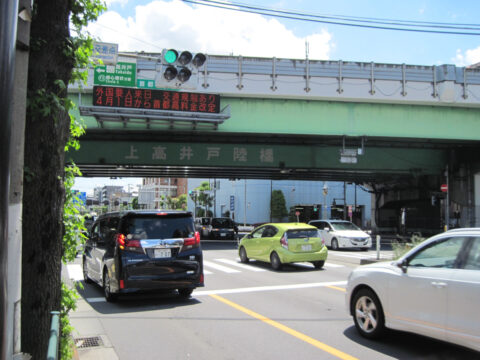 Traffic restrictions are in place. It’s because President Biden is visiting Japan for the first time today. But there were no policemen standing around. 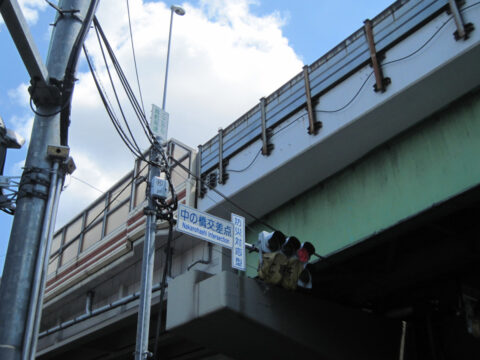 Looking up, it says, “Metropolitan Expressway from here.”
I often see this sign when I drive from the Chuo Expressway. So this is it. 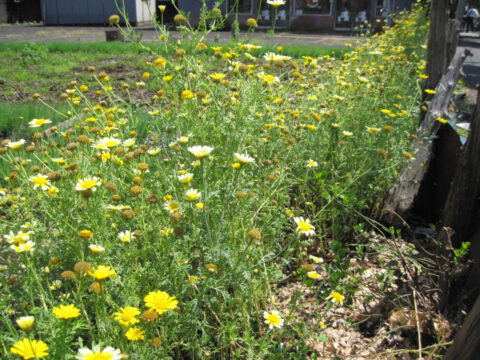 There are a lot of pyrethrums blooming in the field. I thought it was pyrethrum, which has a high commercial value, since it seemed to be grown all the way in the field.

When I went home and looked them up, I found that they seemed to be garland chrysanthemum. However, the flowers have already bloomed, so I guess I can’t expect it to taste good.
By the way, it seems that most pyrethrum flowers are white or red. 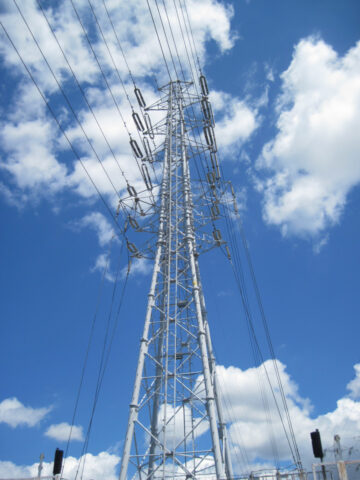 Steel tower of the Takaido substation

This is the steel tower of the Takaido substation.
There are about 20 gauges, so it must be about 275kV. It is quite high voltage. 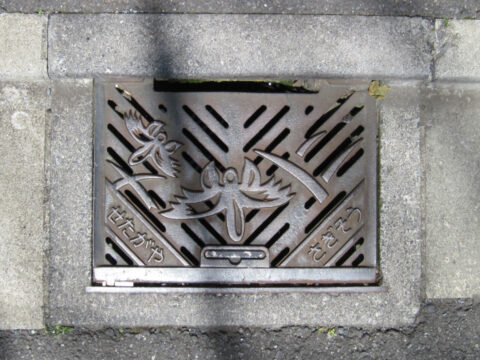 The design of the lid of the U-shaped ditch is pecteilis radiata, the flower of Setagaya Ward. It was a little regrettable that it was shaded by electric wires. 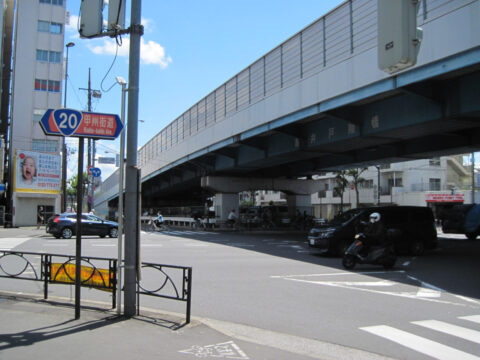 This is the intersection of Kamitakaido 1-chome. National Route 20 in this area is also the old Koshu Kaido. It has been 10 years since I walked here as well. I am amazed that I continue to walk here without getting tired of it. 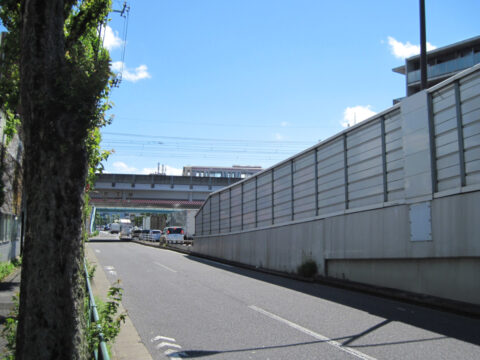 The Keio Line runs almost parallel to the old Koshu Kaido until Bubaigawara.

The Kanpachi passes over Koshu Kaido and under the Keio Line at a multi-level intersection. It is busy going up and down. 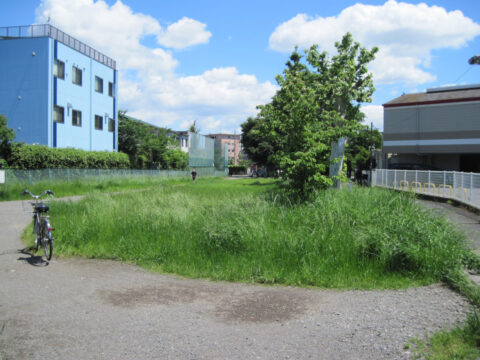 Greenway of the Karasuyama River

I thought it looked like some kind of greenway, so I took a picture of it. I looked it up and found that it was the greenway of the Karasuyama River.

However, until the River Law was revised in 1964, the river flowing toward Chitose Karasuyama was the main stream, and I have walked along the greenway there.

If this is the main stream now, I would like to walk on the greenway there sometime soon. 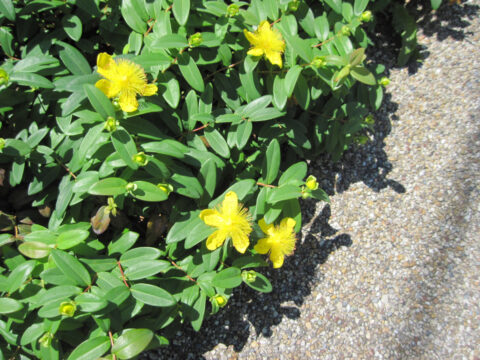 This flower appears to be a chinese hypericum. It is a distinctive flower with long stamens. 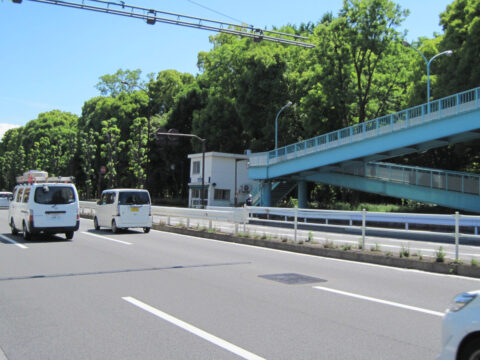 Roka Koshunen has an extraordinary amount of greenery. The greenway of the old Karasuyama River, which flows toward the aforementioned Chitose Karasuyama, runs along this southern edge. 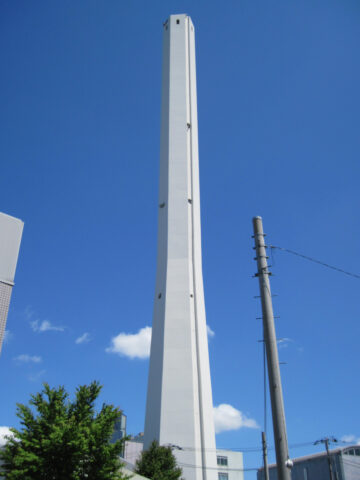 The smokestacks of the Chitose Garbage Disposal Plant were clearly visible from a distance.
About 200 meters southeast of the chimney is the grounds of Meiji University. It seems to be the home of the rugby team. 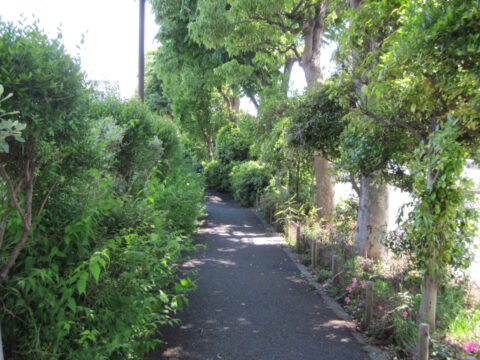 Found a nice little path in front of Setagaya College of Social Work!

It was a beautiful, hot day, but it was cool and pleasant to walk here.

By the way, I noticed on the way that this is a bicycle path. The sidewalk has a small amount of greenery.
It is a waste of time to pass by so quickly when biking, so for me, who enjoys walking, I would like this to be a sidewalk. 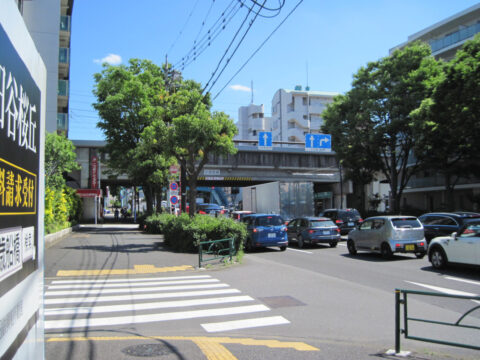 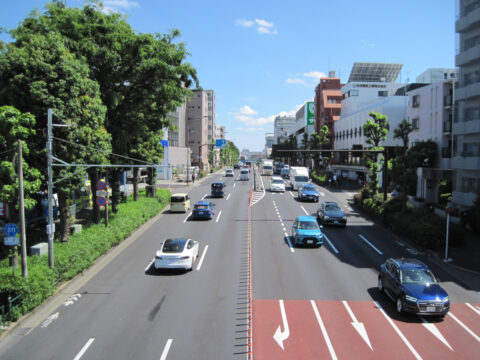 This is the Kanpachi in the south direction from the pedestrian bridge at Kinuta 2-chome after crossing the Odakyu Line.
The road is straight with three lanes on each side. 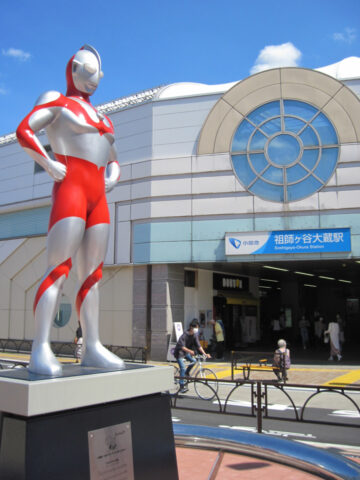 Ultraman in front of Soshigaya-Okura station

There was an Ultraman at the Soshigaya-Okura station.
Eiji Tsuburaya’s residence was near here.

Hakusan Hakusan Shrine is located near Hakusan Station. The name of the place, Hakusan, is said to derive from thi...

I found the Takanawa Gateway Station under construction. It is going to be a bigger station than I expected Visit Izumo...

Today, I will walk in the southern direction from the intersection in front of Shinanomachi Station. Until now, w...

I walked along the Ring Route 1. The loop line almost circles the Imperial Palace. It's not more than 10 km long, so I...
Maizuru Sightseeing by Train and on Foot
Walking along the KANPACHI - Discover Sakuragaoka Sumireba Park! | Kinuta 2-chome - Entrance to KANPACHI Tomei
ホーム
Tokyo