For the New National Stadium, it will be the first sporting event to be held externally

I watched the “Final” of the Emperor’s Cup JFA 99th National Soccer Championship held at the new National Stadium. It was Vissel Kobe versus Kashima Antlers.

This was the first sporting event that the new national stadium would host on the international stage.

I held the barcode up to the code scanner and it stranded me! 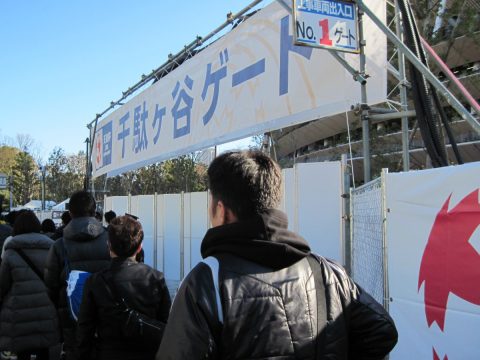 After exiting the Sendagaya station, I walked about 350 meters (on Metropolitan Road 414 (Yotsuya-Tsunohazu Line) with the Tokyo Metropolitan Gymnasium on my right, and came to a construction vehicle entrance marked “Sendagaya Gate.

Looking at this gate, it looks as if the construction is not yet complete. However, this seems to be a temporary enclosure left in place on purpose for security reasons in preparation for the Tokyo 2020 Games. 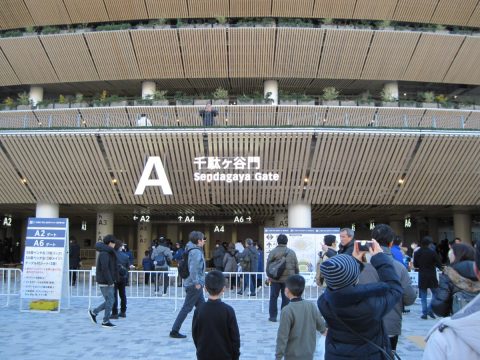 After passing through the visual ticket check, I arrived in front of the Sendagaya Gate of the stadium.
Most people, including myself, took pictures here first. 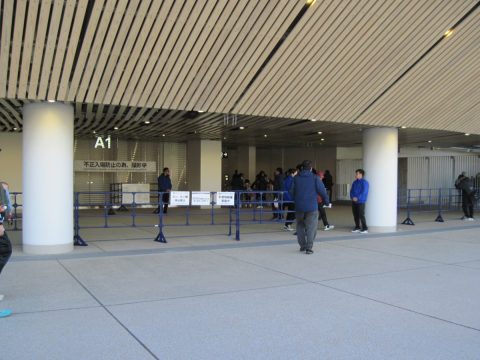 The baggage check is done next to the square pillar in the back. It seems that bottles and cans are not allowed, but they didn’t ask about plastic bottles and water bottles.

There is a code scanner at the back of the gate, where you have to hold up the QR code (square code) on your ticket to pass through the gate. There are two QR codes on the ticket, and it seems that you can pass through the gate by holding up either of them. However, I held up the barcode that was printed separately, so I got stuck at the gate with a message that said, “Please call an attendant.

Report focuses on the differences between the old stadium 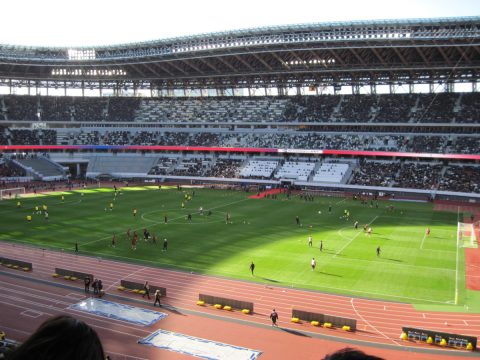 I entered the stadium.

It was covered, so half of the pitch was in the shade and half in the sun. Isn’t it hard for the players to see the ball? I wonder if the lights are already lit to make it less difficult for them to see.

The electric light strip between the first and second tiers is a new touch.
Looking at the empty seats, they are speckled with color, as they are rumored to be.
The old National Stadium is a distant memory, but the grass seems to be greener in the new stadium.
The distance between the seats and the pitch seems to be the same as the old stadium.
There were cameras suspended by wires above the pitch, moving at high speed, but it didn’t bother me much. 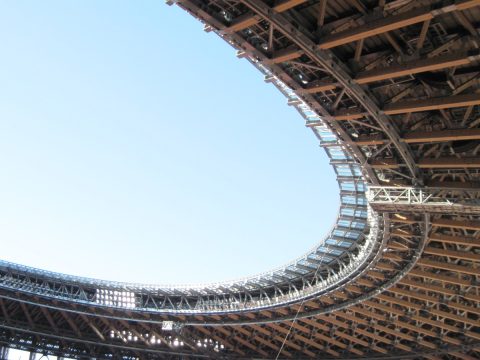 Complex structure of the roof

Looking up, I can see the intricate structure of the roof. How well it was calculated and built. 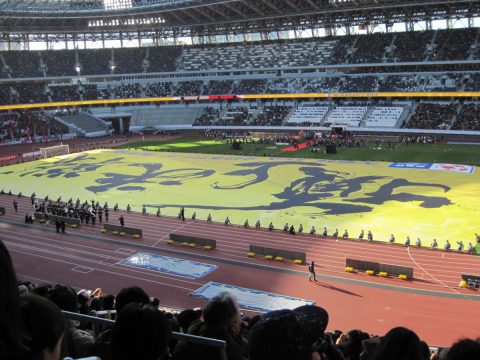 Text of the summit battle

When the practice was over, less than a hundred people came out to compete with something in their hands. When they unfolded it, the words “Summit Battle” appeared!

It looks like a casual act, but how do they make this? I can’t tell where the joints seem to be, and the coloring is very even. 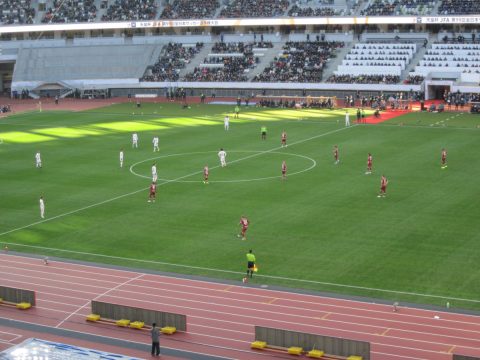 The red number 8 standing at the edge of the circle in the center is Andres Iniesta. I came here today mainly to watch this guy.

As for the flow of the game and the results, I’ll leave that to other websites, as there are many more people who know more than me. 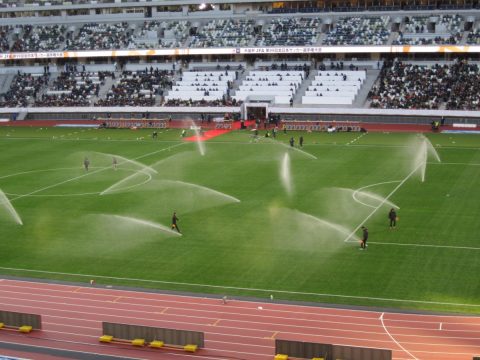 At halftime, there were 12 sprinklers spraying water on half the sides like this. After a while, this water stopped and water started coming out from the other half. 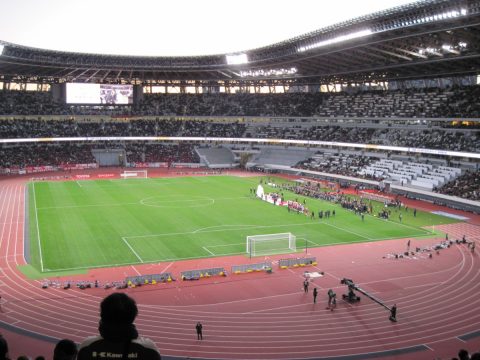 The match was won by Vissel Kobe, 2-0.
Both goals came in with a “What? The shot that looked like it was going in was disallowed for offside.
In the middle of the award ceremony, I went to the other floor to explore. 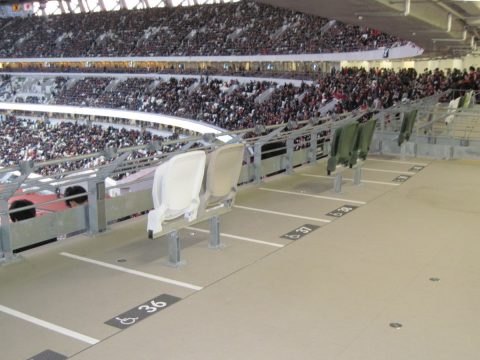 This is the audience seat for wheelchair users.
There was also a seat for the attendant beside it. 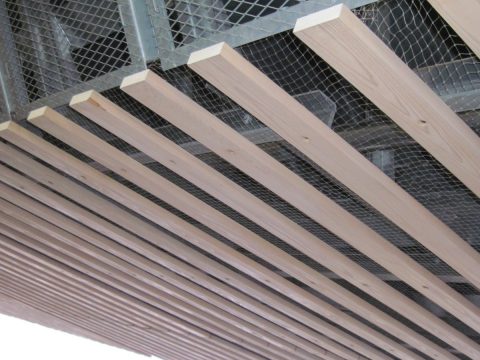 Trees, one of the main features of the new stadium

One of the main features of the new stadium is the use of “wood” in this way.
If you don’t pay a little attention, it’s hard to notice from inside the stadium. 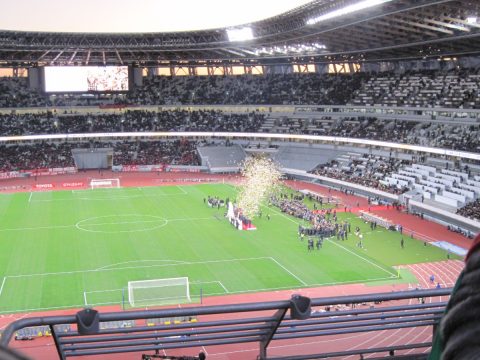 The Emperor’s Cup seemed to have been awarded, and air cannons were being fired. 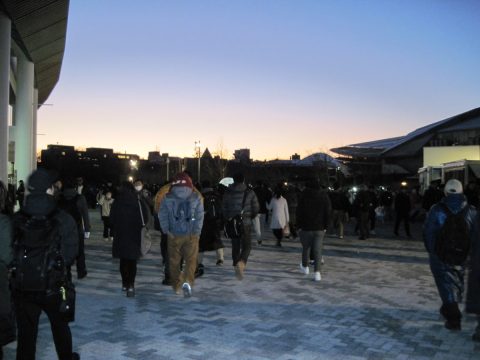 People heading for Sendagaya Station in the sunset

After the event, I headed for Sendagaya Station in the sunset.
The sunset seen with the naked eye was much more beautiful, but with the auto of my compact digital camera, this is what I saw.

By the way, I didn’t even know where the torch stand was set up.

Walking along the Kanda River | Discovering the first autumn leaves after the opening of Shimotakaido Ozora Park! | Takaido - Meidaimae

This time, I walked along the Kanda River from Takaido and found "Shimotakaido Ozora Park". The ginkgo trees were turnin...

I went to the Toyosu market!

Toyosu Market opened to the public today. I decided to visit the market on the first day, thinking that there would be s...

Part of the Takaido Park (tentative name) is scheduled to open in late February 2020. The plan had not changed since Se...

I visited the Takanawa Gateway Station on its second day of operation. I also walked along the Takanawa Bridge underpass...

I took a lap around the outside of the new national stadium, which was completed yesterday, and also visited the Olympic...
Walking along Loop Route 6｜Discovering the remains of the main camp at Shinagawa-juku on the Tokaido Highway! | Gotanda 1-chome - Tennozu Isle
Walking along the Nikko Kaido | Discover Koshigaya Bailin Park! | Koshigaya - Kasukabe
ホーム
Tokyo