Hinaga no Oiwake is the junction of the Tokaido Highway and the Ise Sangu Road. Yajirobe and Kitahachi of Tokaidochu Hizakurige headed for Ise Shrine from here. I, of course, will continue on the Tokaido and head for Kyoto.

When I left the hotel and walked about a kilometer, I realized that I had left my charger with four eneloops in it at the hotel. What an inconvenience!

Without batteries, my handheld GPS and digital camera would not work. Both of them run on AA batteries, so I could buy them at a convenience store, but considering the time and cost involved, it was better to go back for them. 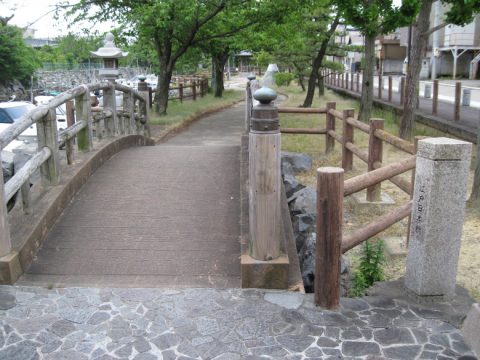 A park that tells its history

The hotel is on the west side of the Tokaido heading south, and it seems slightly closer to return past this “park that tells history”.

The park is a replica of the Tokaido Highway from Nihonbashi to the Sanjo Bridge in Kyoto. By coming here, you can easily immerse yourself in the atmosphere of the Tokaido. The replicas of the Nihonbashi and Mt. Fuji reminded us of the journey I have taken and the one I will take in the future.

After passing the park, I cried and went back to the hotel to get the charger. Thanks to you, I found the charger safely. 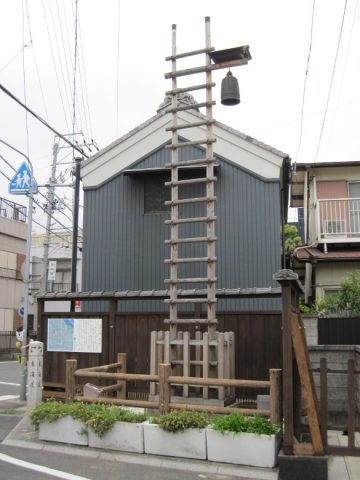 Near Masuo Station on the Kintetsu Nagoya Line, there is the site of Yada Tateba. A tateba is a resting place between jukus (lodgings). There was a wooden fire watchtower here. However, there seems to be no direct connection between the stand and the fire watchtower. 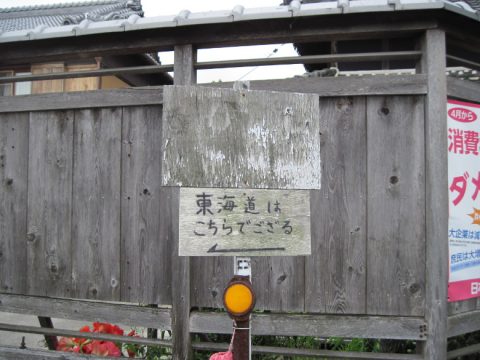 Tokaido is this way

Near Asahi Station on the Kansai Main Line, there was a sign that said, “Tokaido is this way.” This is a road that is easy to take the wrong way, so I was grateful for the help. I said in my mind, ” Thank you very much,” and headed to the left. 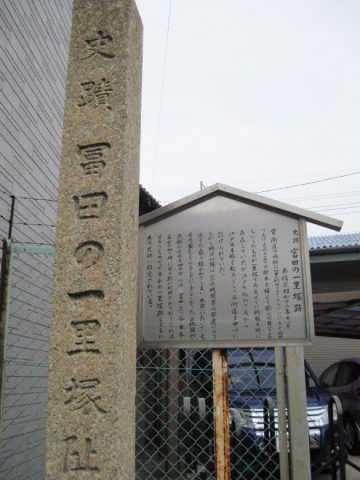 A little after nine o’clock, I found the remains of Tomita Ichirizuka (98 ri)! There is barbed wire strung behind the stone pillar. Is there any reason why the back of the pillar should not be skirted? 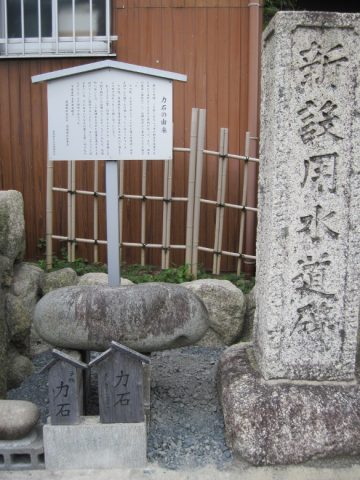 Chikaraishi, located near Kintetsu Tomita Station, is one of the foundation stones for rebuilding the temple. 32 kanme (120kg), it was used in a contest of strength. People in the old days were smaller than modern people, but they had strength. 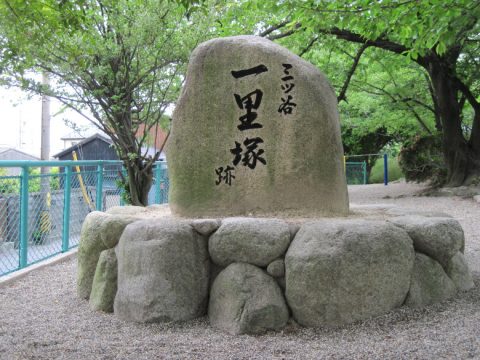 Mitsuya Ichirizuka is the 99th Ichirizuka. If I walk one more ri, I will reach 100 ri. 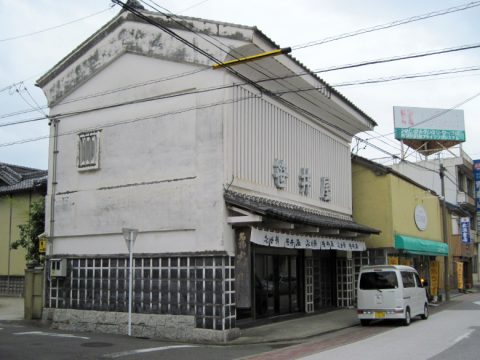 I found Sasaiya! They sell their famous Naga Mochi. The minimum quantity is six pieces, and although I wished they had a two-pack, I wanted to try it, so I bought one. 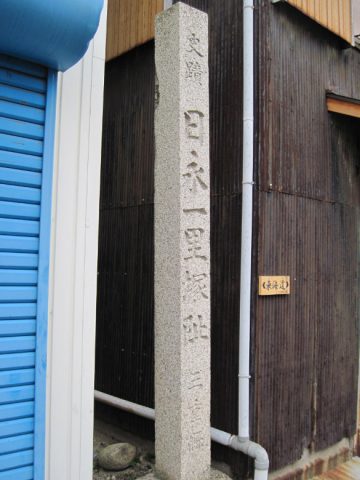 Discover the remains of Hinaga Ichirizuka! It is 100 ri from Edo. But there was only one stone pillar standing. Since it’s a delimiting number, why not make it more appealing? 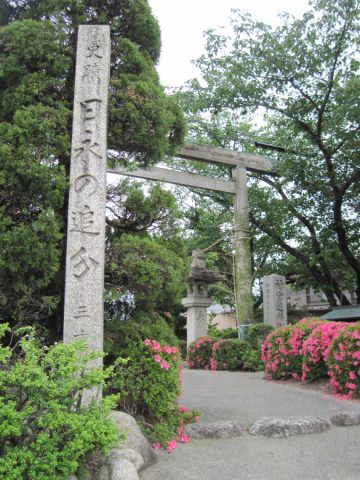 I found the Oiwake (junction) of Hinaga! This is where you part ways with the Ise Sangu Road. We worship from a distance at the second torii gate.

Yaji and Kita of Tokaidochu Hizakurige went to Ise Shrine, so they must have split from here.

Near the torii gate, there was a spring of divine water. I wanted to drink it, but I didn’t want to upset my stomach, so I didn’t. 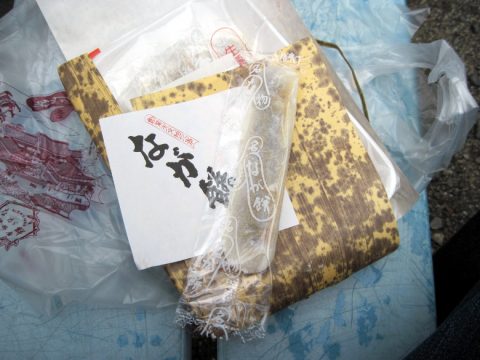 It was lunch time. Since there were chairs available, I decided to eat the “Nagamochi” I had bought earlier for lunch.

Nagamochi is said to have been eaten by Todo Takatora, a master castle builder, whenever he was on his way to work.

It is a long, lightly baked rice cake filled with red bean paste. I could eat two or three of them at a time, so even a six-pack would be fine. 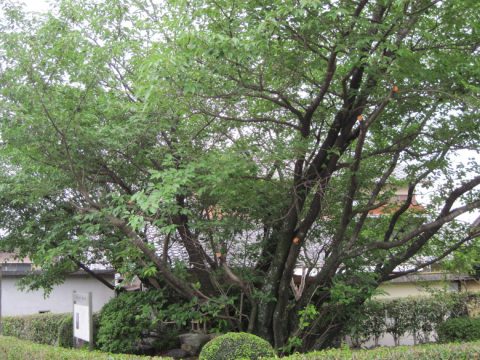 The Kabazakura of Ishiyakushi is said to have sprouted when Minamoto no Noriyori inserted a branch of the cherry tree he was using as a whip upside down into the ground on his way west to defeat the Heike clan. How is that possible?

On the way back to the Tokaido highway from Gamazakura, there is said to be a sketching point for Hiroshige’s Ukiyoe, but I forgot to take a picture from there. Too bad. 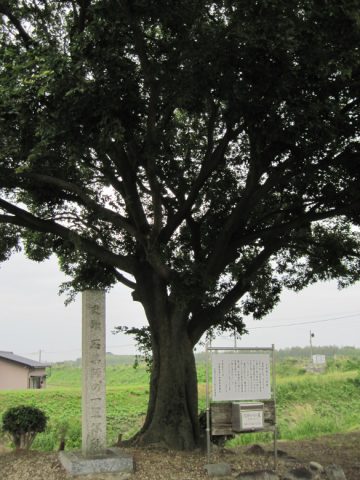 The site of Ishiyakushi Ichirizuka (102 ri) was located beside the tracks of the Kansai Main Line.

Today, I decided to take the road to the intersection of Kumigawara-cho.

However, there were no hotels in this area. I had no choice but to cross the Suzuka River, pass by the Asahi Kasei Suzuka Plant, and stay at the Super Hotel Suzuka, 2.5 km away.

However, even though the hotels are from the same chain, Kuwana’s rate is 4,000 yen, while Suzuka’s is 5,200 yen. I guess it’s because the location is different.

Walking the Tokaido - Discovering that Koushizaka is a tunnel of bamboo grass! | Hakonejuku-Yoshiwara-juku

Hakone Road is fun to walk, with its ups and downs and great scenery. The most impressive part was the tunnel made of...

I have seen many Ichirizuka, but today's one, Nomura Ichirizuka, has a lot of dignity. It is planted with giant muku tre...

The Edo period seems like a long time ago. But the shapes of mountains do not change in a mere few hundred years. Komaya...

I think Tokugawa Ieyasu favored his allies, or perhaps he never forgot his favors, but at any rate, I found such traces....

Eating specialties is one of the pleasures of walking along the highway. Today, I ate Abekawa Mochi and Tororojiru. ...