I heard that the Olympic symbol had been installed in Odaiba, so I took a look. 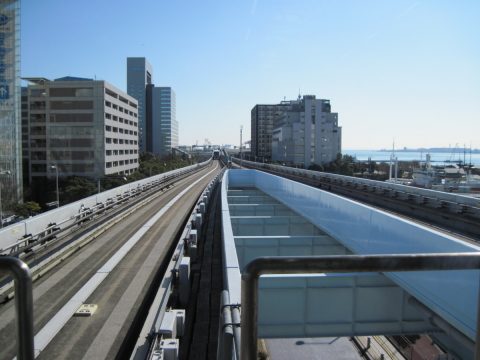 I got off the Yurikamome train. It’s a beautiful day. 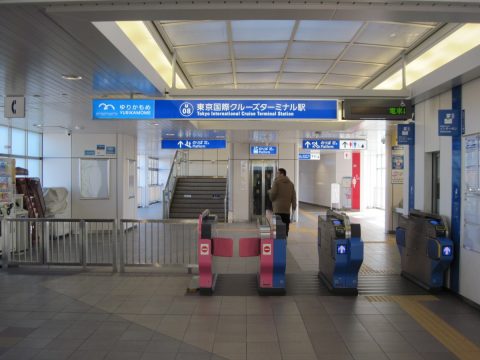 This is the Tokyo International Cruise Terminal Station. I don’t remember Yurikamome having a station name like that!

Actually, this station was called “Fune-no-Kagakukan Station” until March 15, 2019.
It was opened in 1995, almost a quarter of a century ago, but it is still a beautiful station, probably due to the use of materials that do not deteriorate easily.

The Tokyo International Cruise Terminal is not yet complete, but it is expected to open on July 14, 2020, when the Spectrum of the Seas will enter the port for the first time. 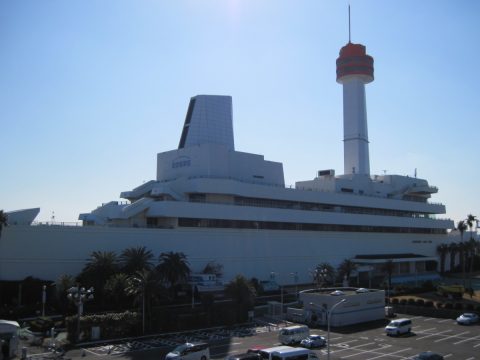 This is the Fune-no-Kagakukan (Museum of Maritime Science), which gave up its station name.

Until today, I didn’t know that it had been on hiatus since October 2011.
It’s a shame, because I’ve been here a couple of times and enjoyed the museum.

However, I was able to see the outdoor exhibition hall, so I decided to take my time. 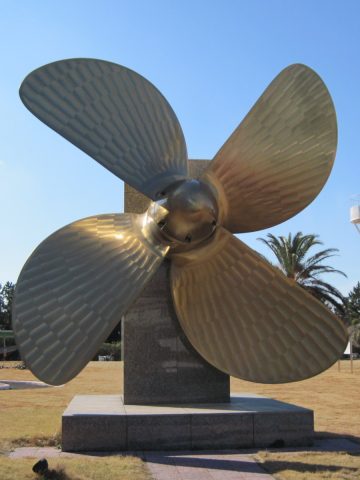 This is a large screw propeller with a diameter of 6 meters.

The surface looks like a pattern of scraped marks. The surface is smooth to the touch, with no bumps. I heard that it is finished by skilled workers using a grinder. That’s craftsmanship. 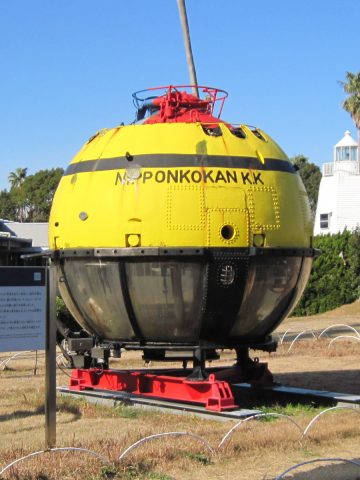 This is the “Tankai,” a submersible research vessel.
It was capable of continuous diving for up to 48 hours at a depth of 200 meters. It was built by NKK Corporation.

I heard that it is cold in the deep sea, so I don’t really want to go there. 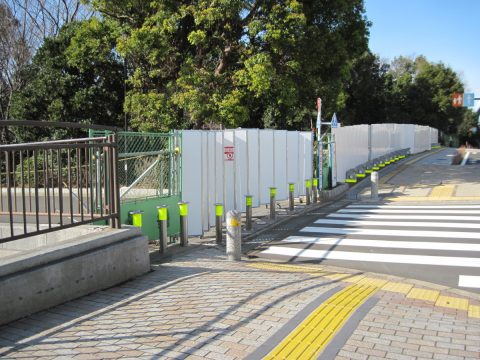 I return to the road that Yurikamome is on (Metropolitan Road 482). After a short walk to the northwest, I tried to enter Shiokaze Park (Sea Breeze Park), which faces the ocean, but it is completely off-limits. Why?

Actually, it was because they were preparing the site for the Olympic Games. What a pity. I wanted to walk along the beach. 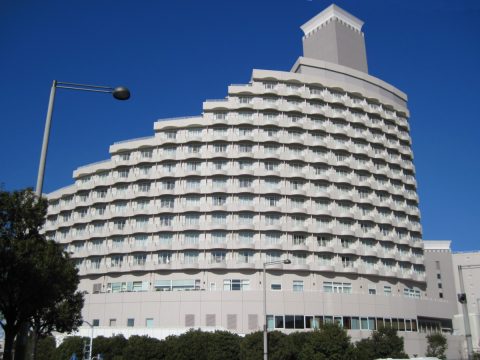 I regained my composure, walked on, and found the Hilton Tokyo Odaiba!

Hmmm, stylish. I wonder where they come up with these design ideas.
I don’t see myself becoming an architect in the future, but if I were, I’d like to design a building like this. 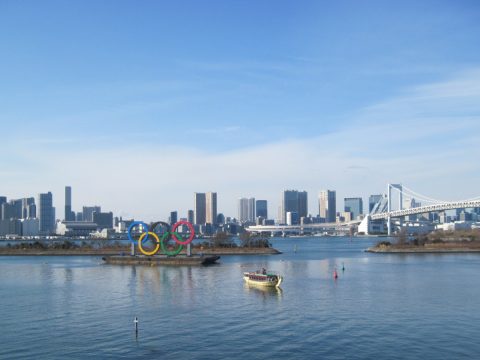 Found the Olympic symbol! It was just installed the day before yesterday, January 17.
I saw it from the pedestrian deck near the Statue of Liberty.

I wonder if the reason why the Olympic symbol was placed here was because they were conscious of the five colors of the Olympics and the seven colors associated with the Rainbow Bridge.

However, from this angle, it doesn’t overlap with the Rainbow Bridge, which is a little disappointing.
The houseboats were also not close enough to the front of the mark, probably because of the restricted access. 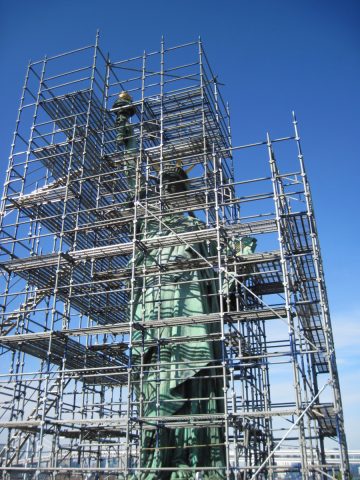 The Statue of Liberty under repair

The Statue of Liberty was undergoing repair work. 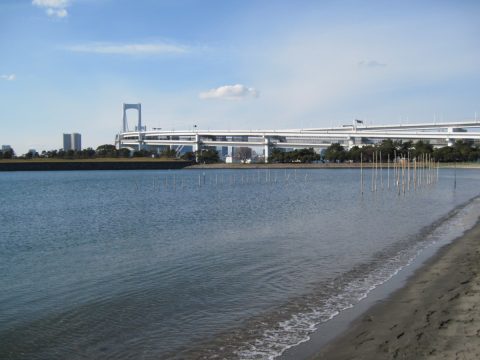 I dug a little in the sandy beach.
Depending on the time of year, clams come out quite a bit, but there was no sign of life today.

There are a lot of sticks standing in the sea. Are they “nori-hibi”?
Norihibi are sticks that are placed in the sea to collect seaweed.

Incidentally, the name Hibiya comes from the word “hibi,” as the sea used to be full of laver sticks. 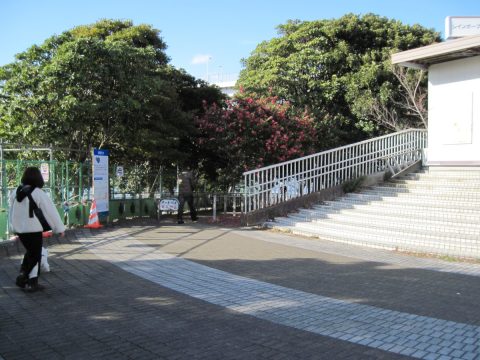 I wondered if there was anything to see in such a place. I decided to follow them.
And then… 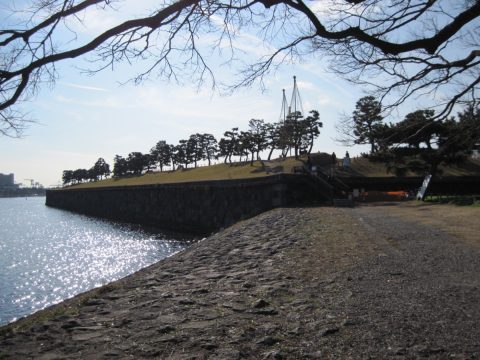 I found the Third Daiba!

I thought you had to use a boat to get to the Daiba, but it was followed by a land route.
I was happy to see that, as I had always wanted to go there someday.
The construction must have been done in fear of attacks from abroad, but the work was done with elegance and care. 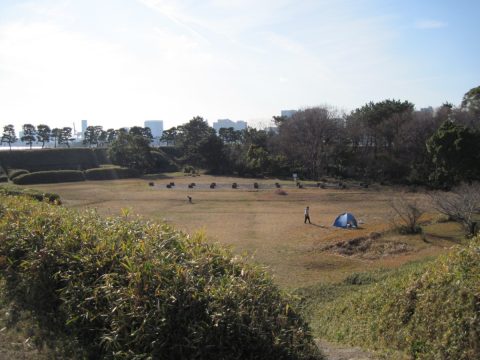 When I went up to the dais, I was surprised to see that the outer perimeter was high and the center was low.

It’s a natural design when you think about it, because you want to launch the cannon from a high place and minimize the transportation of soil when building the platform. However, I had assumed that the center was also high, like a mound.

I wanted to grasp the entire Daiba, so I decided to go around the perimeter in a clockwise direction. 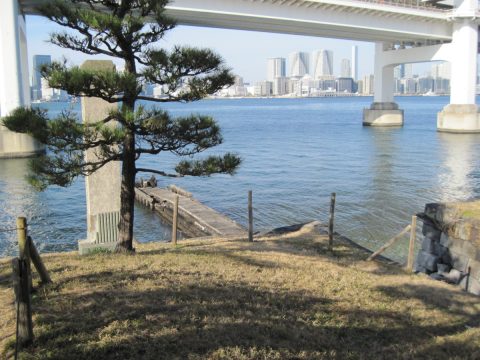 Around the third side, I found the pier!

The walkway leading from the pier is like a cutout, allowing people to come up. This is also a plausible design.
If the entire perimeter of the platform were raised, it would be impossible for our allies to unload the food and shells they brought.
Also, it would be easier to defend against enemy attacks, as only this one area would need to be protected. 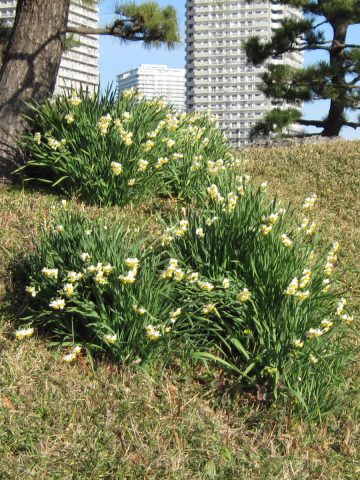 When I came back to the entrance of the Daiba, I found daffodils in bloom.
The daffodils were the only flowers I saw in bloom during my walk today.

Daffodils are a member of the Amaryllidaceae, right? That’s why it’s a poisonous plant. 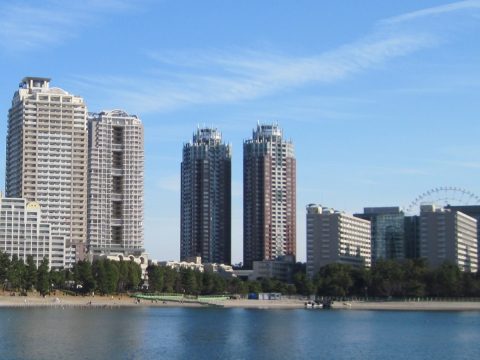 Looking towards the beach where I had just walked, I saw two buildings that looked like candles on a cake. They seemed to be real estate for rent, but they were interesting buildings. 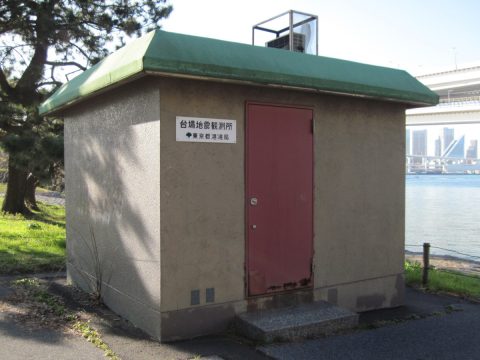 Seismic observatory managed by the Bureau of Port and Harbor, Tokyo Metropolitan Government

I also found an earthquake observatory!

It is managed by the Bureau of Port and Harbor, Tokyo Metropolitan Government. I guess it was set up to prevent tsunami damage.
There are no windows, so it seems to be an automatic observation. The cooler on the roof may be to cool the equipment. 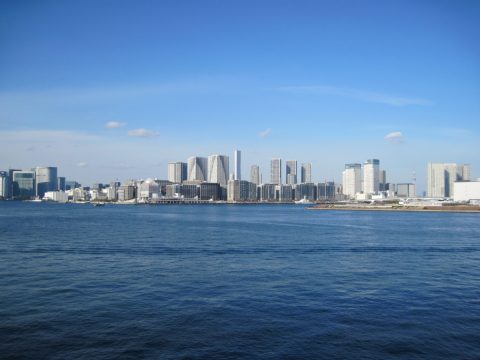 I started crossing the Rainbow Bridge.

In front of us was the Harumi Cruise Terminal, followed by the athletes’ village.
The number of cranes has dwindled down to only about two. It seems that most of the large-scale construction for the Olympics has been completed. 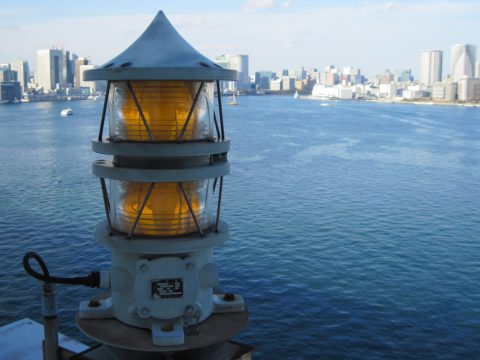 Is it an aviation obstacle light? A picture like this is also very picturesque.
I always compose my photos in the center, so I tried a different composition once in a while. 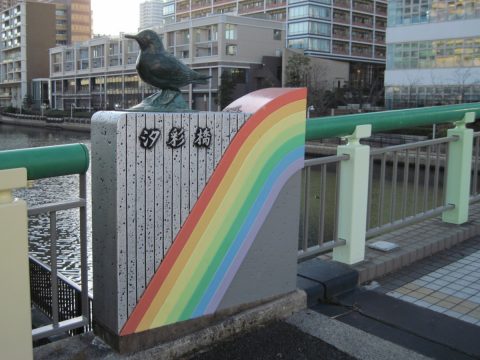 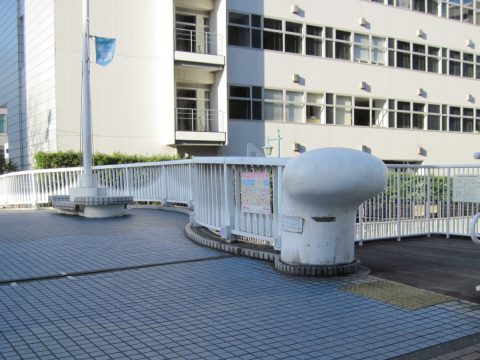 The main pillar of the Shinshiba Bridge is a bit. The bench in the center of the bridge also looks like a ship. 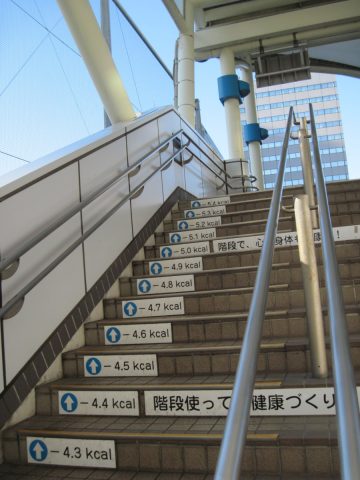 Stairs at Tamachi station with calories consumed written on them

On the stairs of Tamachi station, there was a sign that said how many calories I had consumed.
It is 0.1 kcal per step.

One Glico caramel has 16.5 kcal and can run 300 meters.
Climbing up these stairs consumes 5.4 kcal, which is about the same amount of exercise as running 100 meters.

I took a lap around the outside of the new national stadium, which was completed yesterday, and also visited the Olympic...

There are many places in Tokyo that people talk about. But the one in Nihombashi, where COREDO Nihombashi is located, ha...

20km point Today is the fourth day of walking the marathon course for the 2020 Tokyo Olympics. Finally, I am in the sec...

For me, the image of a one-way street was a narrow one-lane road. However, I was surprised to see a five-lane one-way st...
Walk along Kannana-Dori Ave | Discovered an overpass where you can see more than 10 railroad tracks! | Ichinoe - Aoto Station East
Walk along Kannana-Dori Ave | Discover the ruins of Kasai Castle! | Aoto - Nishiarai
ホーム
Tokyo