The history of Otori Shrine was interesting. There were also kirishitan lanterns and a kagura hall.

The transpante bread was delicious! 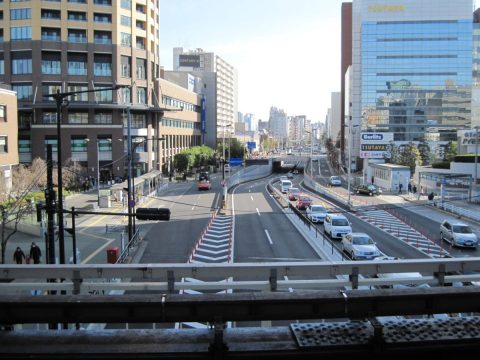 This is the view from the platform of the Toyoko Line in Nakameguro, looking southeast toward Loop Route 6 ( Yamanote Dori ). I’m going to walk here now. 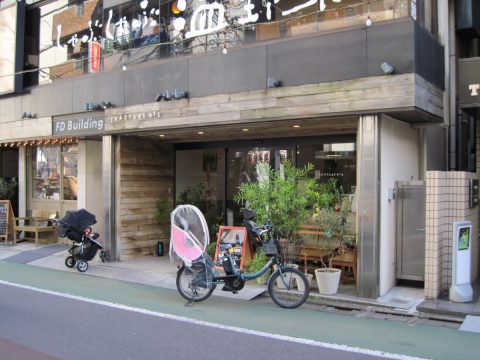 Before we started walking, we were kind of hungry, so we decided to eat before walking.

I found a delicious looking bakery called Transpante, so I decided to buy some bread there.
The store was not very spacious, but it was crowded with many people. It was a style of buying bread placed on a linear counter, where you had to stand in line and go through the counter little by little. 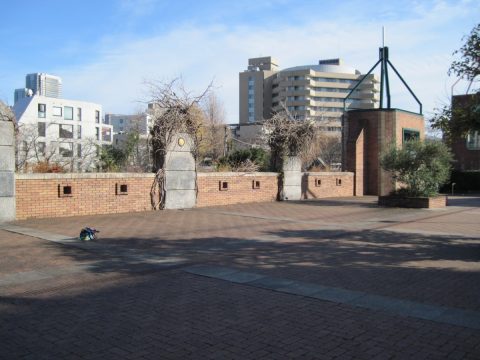 Entrance of the Meguro River Boat

After a short walk, I found a plaza at the entrance of the Meguro River boat, so I decided to sit here and eat some bread. 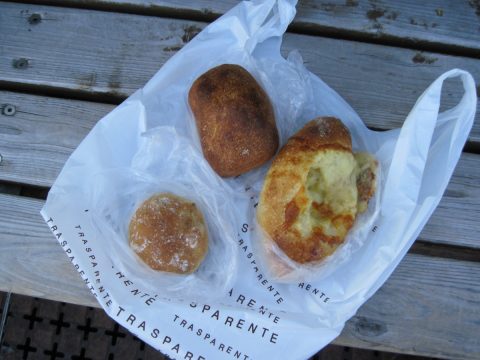 I bought three kinds of bread. I like hard French bread.
I thought I’d stop at the one cheese bread on the right, but I couldn’t stop and ended up eating three of them.

I have baked my own bread a couple of times in the past. Making French bread is not too difficult, as it becomes hard when baked normally, and making soft bread was much more difficult.However, because it is relatively easy, the quality of the ingredients directly affects the taste. Transpante’s bread was delicious.

Otori Shrine is full of attractions 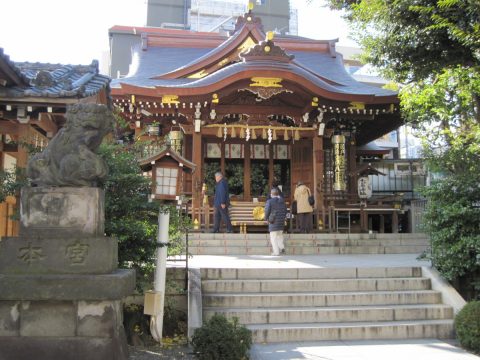 I found the Ohtori Shrine!

About 20 years ago, when I went to the Parasite Museum from Meguro Station, I passed by it and was curious about the large shrine. I finally got the chance to pay a visit.

After defeating the Emishi, Yamatotakeru no Mikoto died in Nobono (Kameyama City, Mie Prefecture), and his spirit became a swan. For this reason, he was called Torimyojin. Since the swan appeared here, the shrine was renamed Ohtori Shrine. 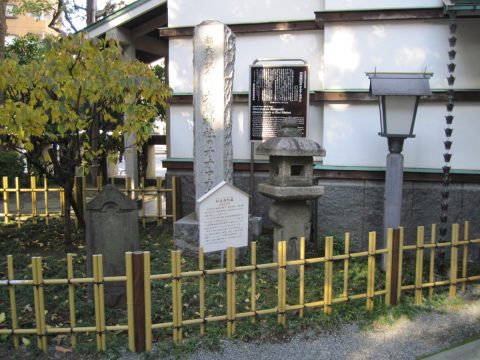 Kirishitan lantern and a monument of Ohakagashi

There was also a Kirishitan lantern and a monument of Ohakagashi.

The Kirishitan lantern was enshrined in the mansion of Matsudaira Tomonokami of the Bizen Shimabara clan, which was located in this area. However, I could not find any features related to Kirishitan. Aren’t Christians not supposed to worship idols in the first place?

The Ohakagashi is said to be a variant that used to grow in this area, and it died out in 2002. However, I was told that its branches and leaves are preserved as type specimens in the Tsukuba Experimental Botanical Garden of the National Museum of Nature and Science.
A type specimen is a specimen used to give a scientific name.
Of the type specimens, the most standard specimen is called the holotype. Since the explanatory board said only “type specimen,” I guessed that the Ohakagashi grows in other places and the specimens taken from those places are holotypes. 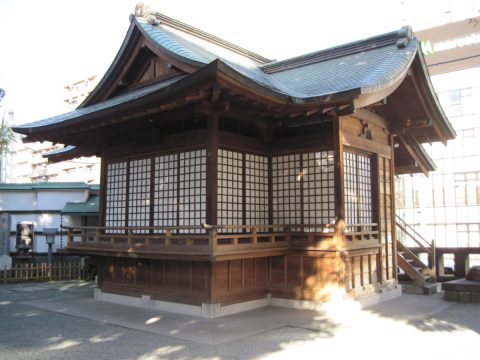 The kagura hall was also magnificent. 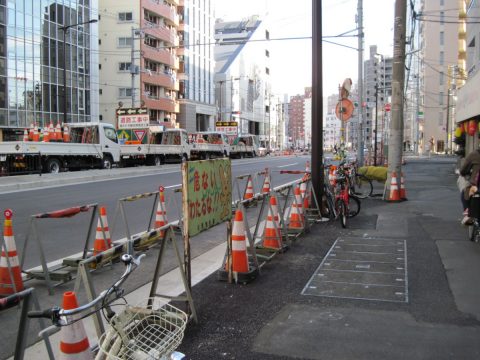 Construction of streets in Loop Road 6.

This construction was labeled as street construction. What does it mean to build a street when the street is already there? Does it mean sidewalk extension work? 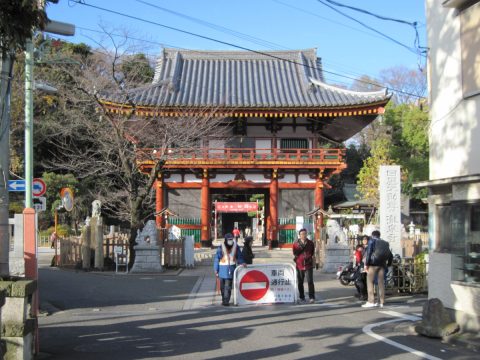 Speaking of Meguro, it is famous for Fudo-san. I don’t often get a chance to visit this place, so I decided to take a short trip. 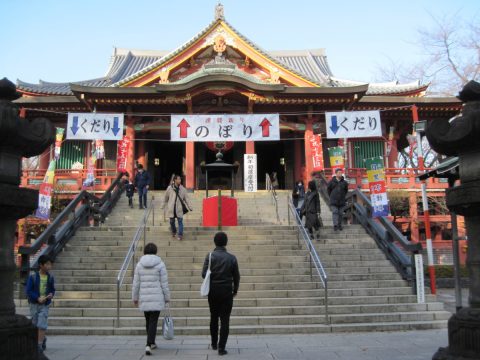 The main shrine of Meguro Fudoson

Already, ” climbing” and “descending” signs have been installed for the first visit to the temple. 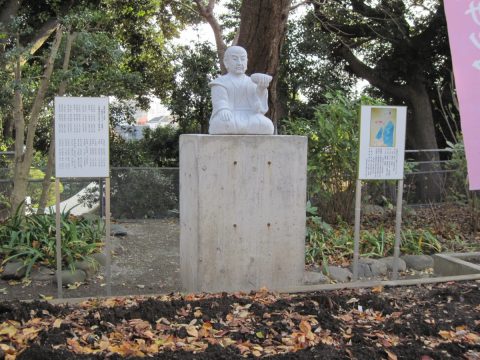 There was also a statue and a sweet potato field, apparently related to Aoki Kunyo, known as “Sweet Potato Teacher.”

I could go to Gotanda Station from the intersection of Nishi-Gotanda 1-chome, which intersects with Route 1, so I decided to end my walk here today. 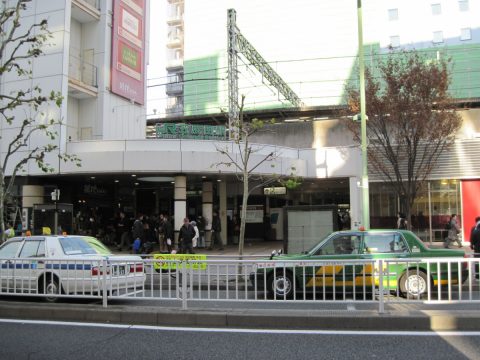 This is Gotanda Station.
Am I the only one who thinks that the color scheme could be a little more creative to make the station name stand out?

Today, we will walk halfway along what is commonly known as the "MacArthur Road. Found Tamiya Plastic Model Factory Shi...

Walking along Loop Route 2｜Discovering that you can visit the State Guest House! | Yotsuya Mitsuke Kita – Starting and Ending Point

Walking along Loop Route 6｜Discovering the remains of the main camp at Shinagawa-juku on the Tokaido Highway! | Gotanda 1-chome – Tennozu Isle