I don’t like crowds, so I was planning to watch the celebration ceremony on TV.

However, since I introduced the route in my previous article, I decided to participate.
The result…

I received a hand flag when I attended the event, so I’ll show the dimensions at the end of this article. If you’d like, why don’t you make your own flag and enjoy the atmosphere?

Even though I arrived an hour before the parade started, I was already late

I had already made a preliminary inspection and decided to attend the parade in front of the National Diet Building.

However, from the moment I got off the train at the Diet Building station one hour before the parade was to start, I realized that I was already late. People were queuing up to get off the train, and there was a long line of people waiting in the restrooms just outside the ticket gate.

The line of people leading from Kokkai-gijidou Station

The line of people continued even after I reached the ground level. The street that normally leads straight through to the front of the Parliament building is closed and I have to go around it. 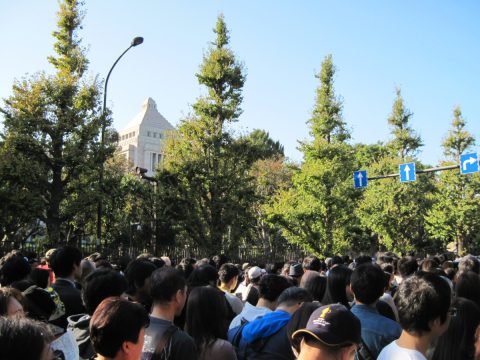 With the National Diet Building on my left, I get in line for the baggage check.
I really want to go to the northeast side of the Diet Building, but I’m stuck in the southeast position.

I hear the policeman announcing again and again, “The parade may be over before you get to the baggage check. But no one complains, no one riots, and everyone lines up quietly.

There were people of all ages, from babies to the elderly. The number of foreigners was probably about one out of every 100 people. 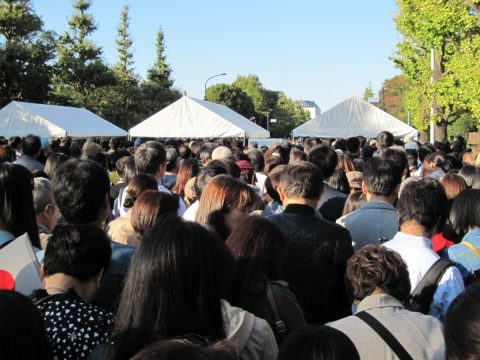 The tent for the baggage inspection & body check was approaching.
As I approached the tent, the announcement changed to “Please remove any items from your pockets,” or “Please open the front button of your jacket so that you can be ready for the body check,” or “We will call you one by one, so please do not enter the tent until you are called.

When you reach the tent, you will be called one by one as announced.

A male policeman asked me to show him the inside of my bag, so I unfolded my bag on the long desk and was checked. I had a plastic bottle with me and was asked to take a sip.

Next, I was body-checked by a policewoman.

Once outside the tent, a male police officer checked me with a metal detector. The detector was held a few centimeters away from my body and did not touch my body. There were about three plainclothes detectives with badges per row in the vicinity.

After they were done, a middle-aged woman with a friendly smile handed me a hand flag, which I accepted after thanking her.
I’m sure they count the number of participants by the number of flags distributed.

And I didn’t see anything 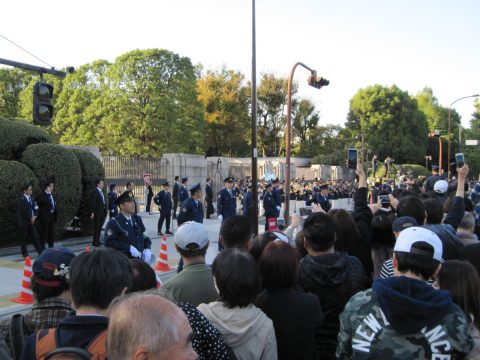 On a normal day off, there are only a few people to be seen around the main gate of the Diet, but today the crowd was so large that I could hardly get close to it.

However, from a distance, I could see a music band that seemed to be the Metropolitan Police Department Band. 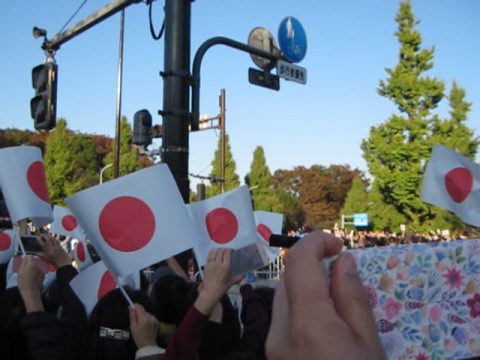 The moment the parade passes

The parade started about 20 minutes from that point. A nearby person showed me a one-segment TV, so I could see that it was about to turn at the Shukudabashi intersection and pass in front of Sakuradamon. The brass band started, and I was still thinking that it would take a minute or two, when the flags started waving for about 20 to 30 seconds. I couldn’t see anything because there was a wall of people in front of me, but people in the vicinity also waved their flags.

Then there was a quiet moment of about three minutes, and the policeman announced, “It’s over,” and people came to their senses and started to head home. 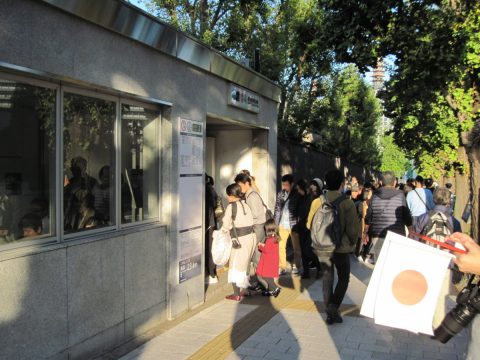 People on their way home

Reveal the dimensions of the hand flags!

Dimensions of the hand flag 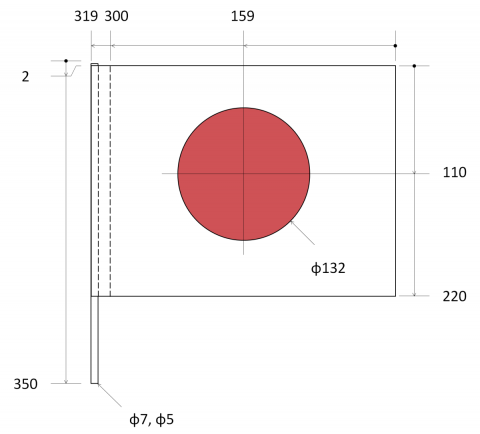 Dimensions of the hand flag

I measured the dimensions of the hand flag and made a drawing.
I’ve never learned drafting, so please forgive me if I didn’t follow the unspoken rules.

Prepare a thin sheet of white paper that looks like lightly coated hanko paper and cut it to 345 x 220.
Using the upper right as a reference point, draw a red circle with a diameter of 132, centered at 159 horizontally and 110 vertically, to form a flag.
Apply glue at 45 from the left.

Leave an extra 2 from the top of the paper tube, and wrap it around the edge of the flag.

I've been visiting the Daijokyu Palace, feeling the tradition, the history!

The public visit to the Daijokyu Palace will last for 18 days from November 21 (Thursday) to December 8 (Sunday). If ...

Have you ever heard of an observation field? It is a place to observe temperature, humidity, atmospheric pressure, preci...

I walked the course of the Congratulatory Procession (Enthronement Parade)!

I have walked the course of the Celebration of the Imperial Procession and took some photos. I hope you find them useful...

I walked along the Ring Route 1. The loop line almost circles the Imperial Palace. It's not more than 10 km long, so I...
Walk along Kannana-Dori Ave | Discovering two windmills and three water parks! | Kasai Rinkai Koen-mae Intersection - Ichinoe Station
I've been visiting the Daijokyu Palace, feeling the tradition, the history!
ホーム
Tokyo