I discovered how to make potted grapes. It was a Columbus egg kind of idea. 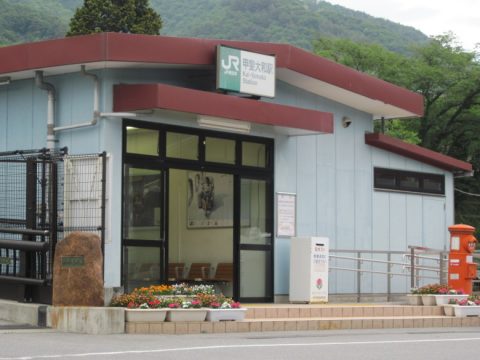 Until 1993, Kaiyamato Station was called Hajikano Station. It is said to be a historic station that was opened as the terminus of the Central Line of the Japanese National Railways when it opened on February 1, 1903.

The stone in the foreground is the main pillar of the Shin-Hajikano Bridge. It seems to be made of Koshu Kurama stone, which is mined in this area. 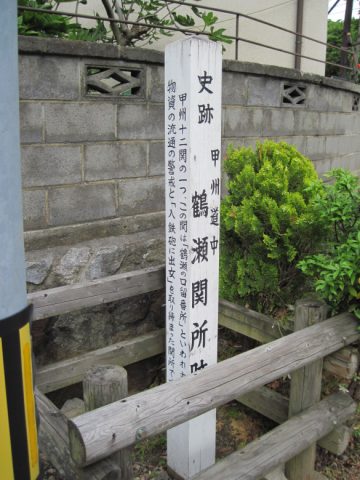 Remains of the Tsuruse Barrier

At the west end of Yamatobashi Bridge, the road joins the Koshu Kaido, and about 350 meters west of the bridge, I found the remains of the Tsuruse barrier. It says that it was one of the 12 Koshu Sekisho. There were many Sekisho, weren’t there? 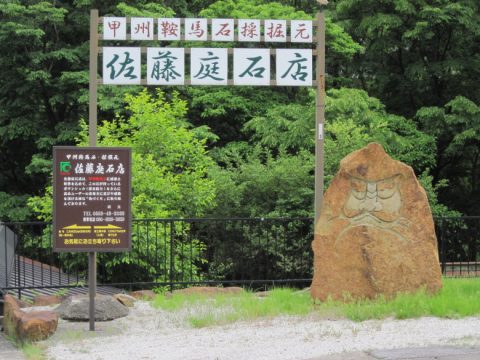 There was a mining source for the aforementioned Koshu Kurama stone.

Koshu Kurama stone is a diorite. In light of the way I remember igneous rocks, “Shinkansen Ha Kariage,” it is a deep-metamorphic rock, and the color is somewhere between whitish granite and blackish gabbro, right? Well, yes, but Koshu Kurama stone has a particularly distinctive rust color.

The Kannon Tunnel appeared. I was relieved to see that a sidewalk had been secured. Without a sidewalk, there would be nowhere to run when a car came. 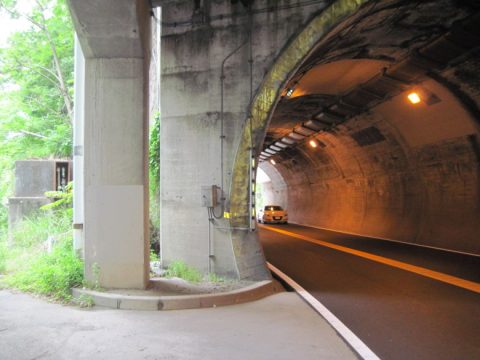 However, the walkway has been taken out of the Kannon Tunnel in the middle of the tunnel.

The cross section at the entrance of the tunnel was square, but from here on, it’s round.

I wonder if they were made at different times. As for the area with a round cross section, I think there was originally space for a sidewalk outside the tunnel, and the tunnel was dug only for the roadway. 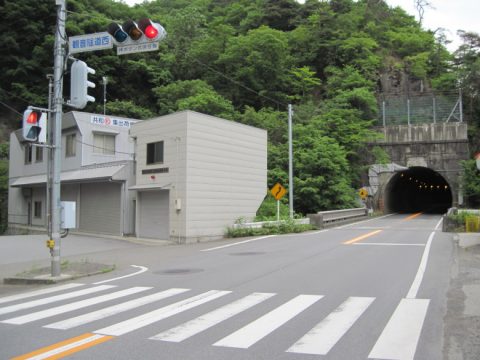 Crossing the crosswalk at the intersection of Kannon Tunnel West, I pass under this road in a U-shaped loop. Did the Koshu Kaido Road always have this kind of loop shape? 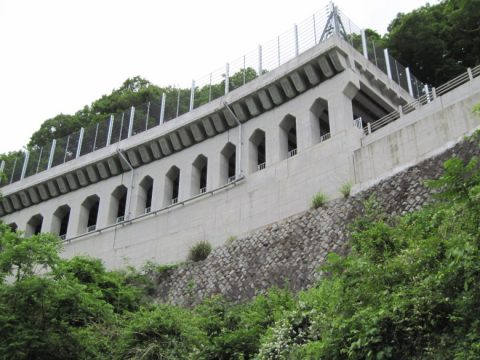 The elevation dropped by about 20 meters at once. The Kyowa Dōmon (Cave) on the road I was walking on earlier looks so high up. 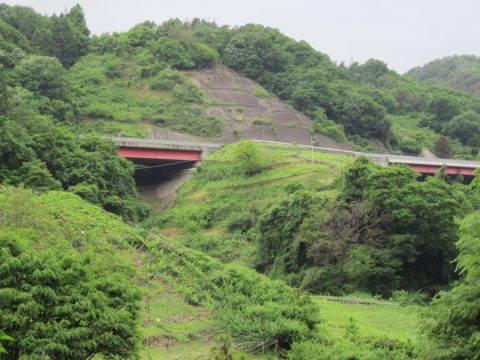 On the left, you can see the Chuo Expressway. It was an amazing construction work, carving the mountains and building piers.

Here I am on the road in Yokobuki.

As I tried to pass a child in the upper grades of elementary school, she greeted me with a “hello. Of course, I greeted her back in a clear voice. In Tokyo, I rarely get greeted by strangers, so it was a refreshing experience.

It is said that the streets of Yokobuki still retain the atmosphere of the past, but I wonder if it was a place where greetings were common from long ago. 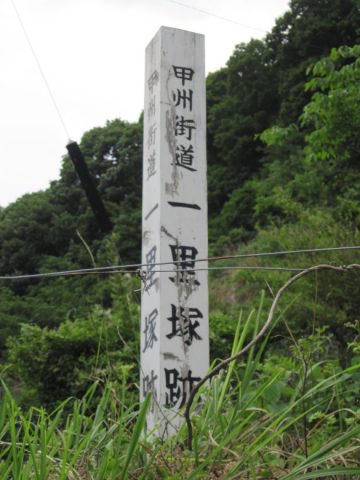 I found the remains of a Ichirizuka! There is no name written on it, but I think it is the remains of Yokobuki Ichirizuka (29 ri). In the old days, it took people from Edo to here in three days. For me, it took 12 days. However, the Koshu Kaido still continues. 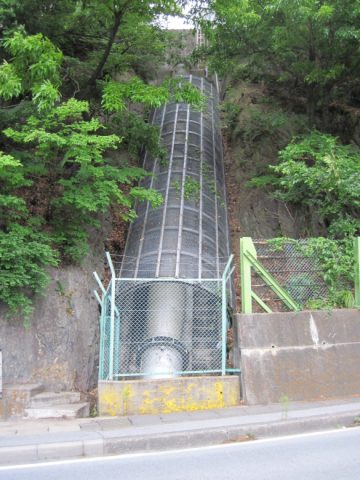 I found the hydraulic pipes of TEPCO’s Kashio Power Plant! It even has a polite roof.

The Kashio Power Plant has a constant output of 810 kW, which means that if I assume that the power consumption of a microwave oven is roughly 1 kW, about 800 units can be used. It is a facility that I pass by without thinking, but it is doing its best to protect the global environment. 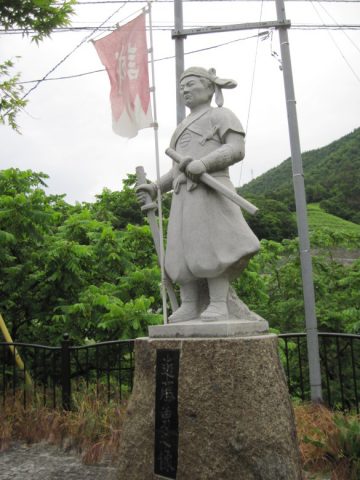 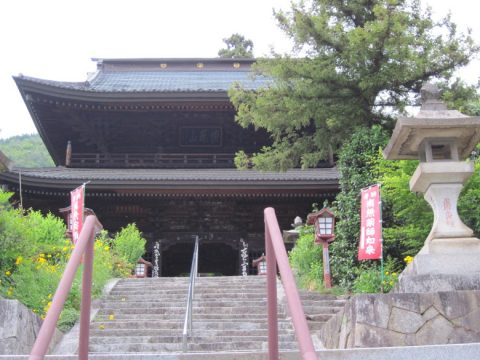 The main hall of Daizenji Temple and one of its attached miniature shrines have been designated as national treasures. The temple also possesses several important cultural properties. I hope to visit the temple someday. 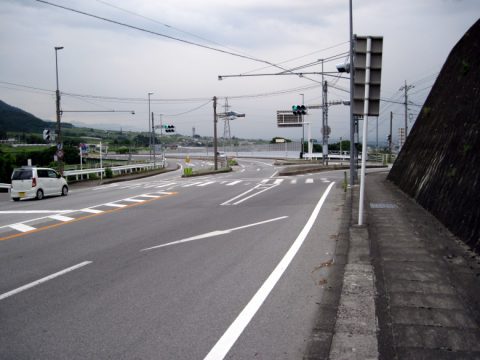 About 400 meters from Daizenji Temple, you will come to the Kashio intersection. The road to the left is Route 20 (Katsunuma Bypass). Katsunuma Bridge, which starts here, spans the Hikawa River. Koshu Kaido is the road to the right. 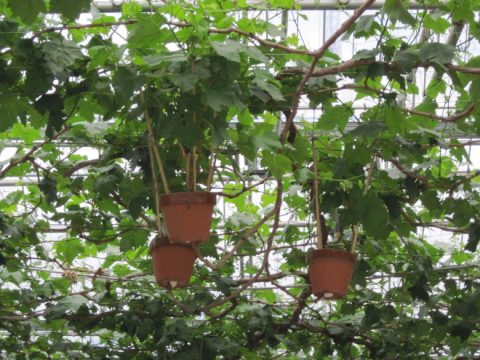 I think I may have seen something I shouldn’t have.

I discovered that they were making potted grapes.

It’s true that you can’t make potted grapes with fruit unless you do this. The person who thought of this is very clever.

Today I am returning from Katsunuma Budogo. The road splits from the Koshu Kaido at the intersection with the temple marker of Jogyoji Temple. 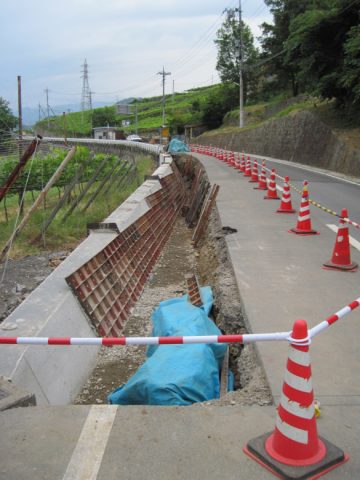 It is about 1.7 km to Katsunuma Station, an uphill climb with an elevation difference of 80 meters. Actually, it was very difficult to walk this way.

Hachioji-juku I've been to Takao Station several times. But today was the first time I came near the face of th...

Walking along the Koshu Kaido | Discover the confluence with Nakasendo! | Kanazawa – Shimosuwa

I did a terrible thing. Instead of following the Koshu Kaido in order, I saw the end of the road (where it joins the Na...

When an old highway approaches a major city, it may have a right angle bend. There are two right-angle bends on the K...

Found a flag tower built to commemorate the Tokyo Olympics in Jingumae 1-chome!

Today I walked around Shibuya and found a flag tower built to commemorate the 1964 Tokyo Olympics. Shibuya The are...

At the Inume-juku, I found a Koizuka Ichirizuka, or mound of love! The name sounds good, and the mound itself exists ...

When I take a walk, I often come across structures that were built long ago. This time, as soon as I started walking alo...
Walking along the Koshu Kaido | Discover Sasago Pass! | Kuronoda – Komakai
Walking along Ome Kaido | Discovering the remains of the Silk Testing Center! | Nakano – Naito Shinjuku
ホーム
Yamanashi