I found three ventilation stations on the Metropolitan Expressway.
I took a detour to see a large millstone. 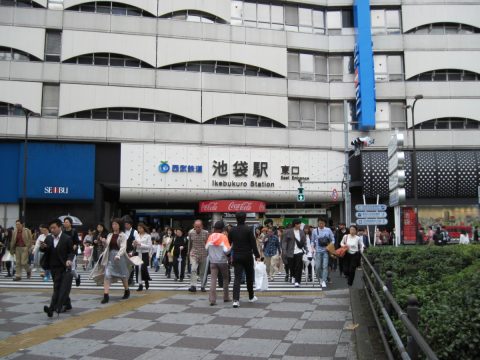 I started from Ikebukuro station.
The west exit is closer to get to Loop 6, but I found myself at the east exit.
For me, Ikebukuro station is one of those stations whose structure I haven’t fully grasped, so it can’t be helped. 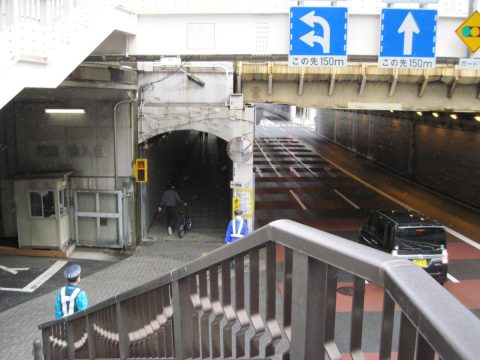 I passed through the guard on the south side of the station and came to the west exit. It was my first time to pass under this guard. There were quite a few people using it.

Ventilation station three in a row! 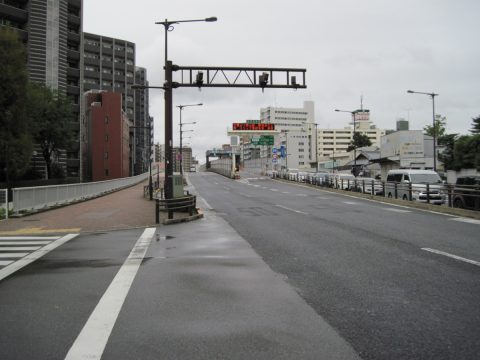 We are now on Route 6. This is the Nishi-Ikebukuro exit of the Metropolitan Expressway.
From Ohashi JCT to the city center, the road is closed to security traffic. It’s the day of his enthronement. 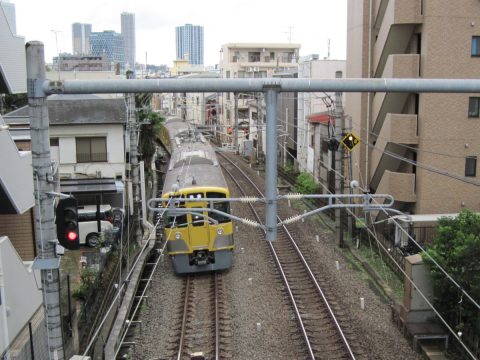 On the other side of this bridge is Shiinamachi Station, the goal of the previous week, and this is where I’ ll continue. 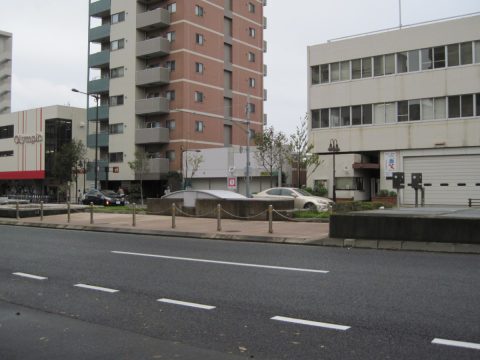 In the middle of the road, like an island, I found the emergency exit for the Tokyo Metropolitan Expressway!
Even if you can get out safely from the underground, it looks quite dangerous to cross this one-lane roadway. I wonder why they didn’t build the exit on the sidewalk. 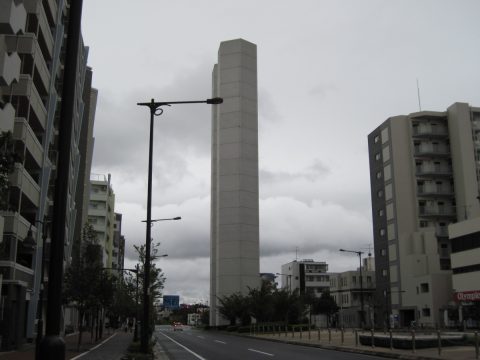 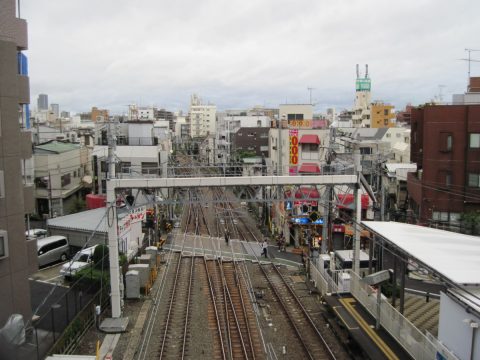 This is the Seibu Shinjuku line. There are many points on the line.
I think they are switched by computer now, but in the past, when they were switched manually, I don’t think they made mistakes. 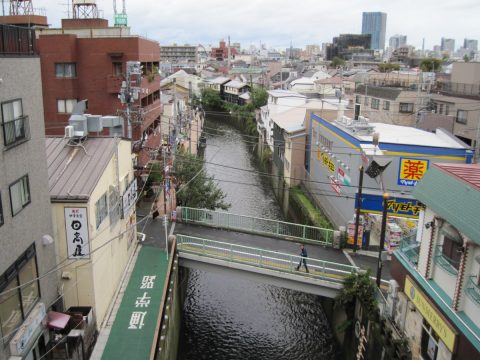 The name of this area is Naka-Ochiai or Kami-Ochiai. Ochiai means a place where rivers meet, and the name was given because the Myoshoji River and the Kanda River meet here. The actual confluence is more than a kilometer away from here. 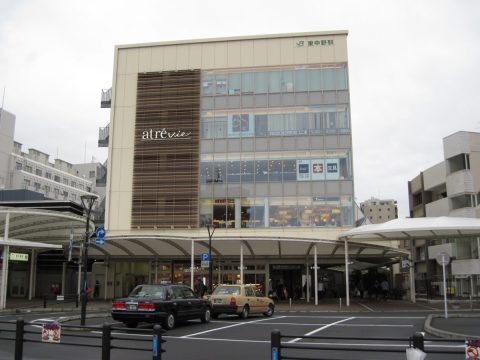 Higashi-Nakano station has become so stylish.
I remember when I came here twice in my school days, there was nothing but a platform and it looked unrefined. 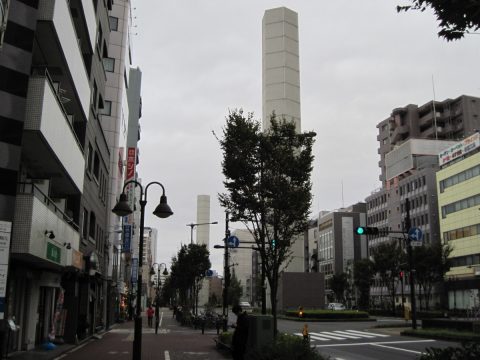 This is the ventilation station in Higashi-Nakano. When I first saw it, I was overwhelmed by its size, but I’ve had enough. A beautiful woman gets bored in three days, and a Buddha’s face can be seen three times. If the design was different, it would still be fun to look at, but it seems that the emphasis is on functionality.

On today’s walk, I didn’t see anything noteworthy except for the ventilation system, so I decided to take a little stroll. 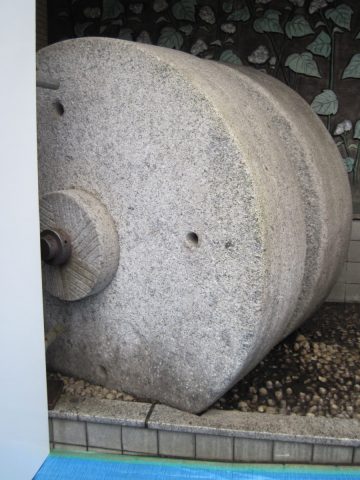 This is a large stone mill of Ishimori Flour Milling in front of an apartment building called Stone Mill. There is a cut in the curb, which looks like a car stop.

I can’t find an explanatory board near the real thing. According to the Ishimori Flour Milling website, it is 2 meters in diameter and was actually used. But it didn’t say where it was installed, the power source, or the number of rotations.
It seems that the company is still using the millstone for milling, and the speed of rotation may be a trade secret. 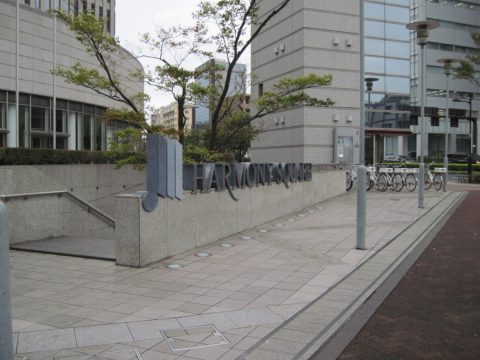 I went home from Nakanosakaue. This stylish staircase led to the station.

Today, we will walk halfway along what is commonly known as the "MacArthur Road. Found Tamiya Plastic Model Factory Shi...

Walk along Kannana-Dori Ave | Found a sidewalk on Kaname-cho Street suitable for a walk! | Nakajujo 3-chome, Kita-ku – In front of Musashino Hospital

I walked along the Ring Route 1. The loop line almost circles the Imperial Palace. It's not more than 10 km long, so I...
Walking along the Musashino Line | Discover the remains of the Musashino provincial government (Kokushi-kan and Ieyasu Goten Historic Plaza)! | Fuchu Honmachi – Shin Kodaira
Walking along Loop Route 6｜Discovered the remains of an ancient residence at Yoyogi Hachimangu Shrine! | Nakano Sakaue – Yoyogi Hachiman Mae
ホーム
Tokyo