I visited the Takanawa Gateway Station on its second day of operation. I also walked along the Takanawa Bridge underpass (Takanawa-bashi-kadou-kyou). 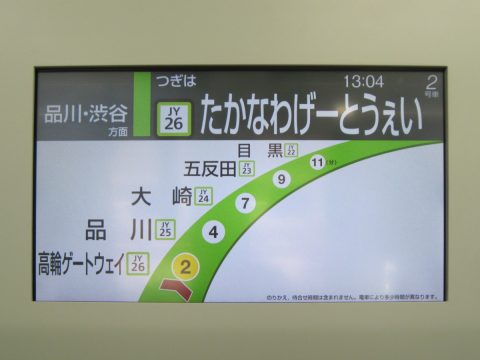 The number for Takanawa Gateway Station is JY26.

The station numbering is JY26, not a decimal or a branch number, so it seems to have been properly reserved. Shinagawa is JY25, which means that the stations are numbered in counterclockwise (Uchi-mawari) order from Tokyo Station. 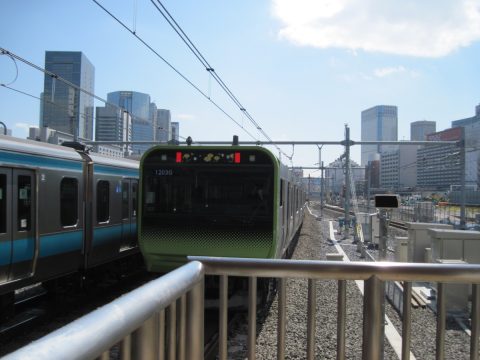 The Yamanote Line’s destination indicator with a dandelion on it

At the end of the platform on the Shinagawa side, I see off the train I’ve just boarded.

Is the flower on the destination display a dandelion? I just noticed it for the first time. Well, the Yamanote Line basically goes around in a circle, so there is no need to indicate the end of the line, right? 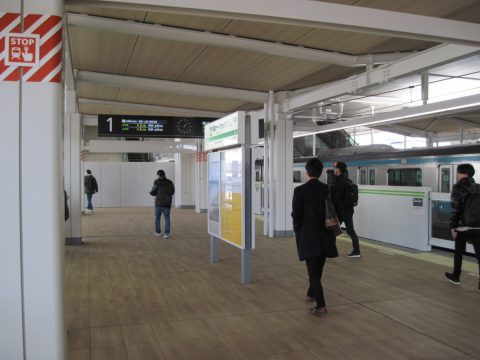 Near the tip of the platform at Takanawa Gateway Station

This is a shot of the area around the end of the platform.
There are so few people that it’s hard to believe.

The floor is wood grain. You can feel the warmth.
The clock is analog.

Yes, it was billed as the first new station on the Yamanote Line in 49 years, but the Keihin Tohoku Line also stops here. 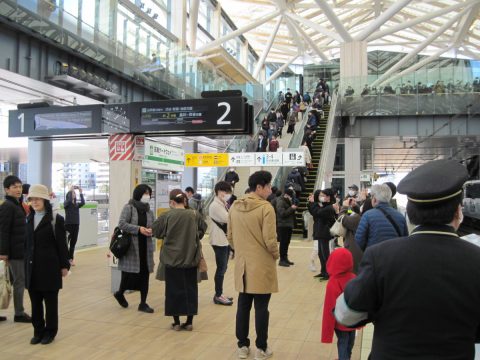 Near the center of the platform at Takanawa Gateway Station

As I proceeded to the middle of the platform, more and more people started to arrive. The ceiling is quite high, with geometric structures visible.

View from the second floor of Takanawa Gateway Station

This is what it looks like when you climb up to the second floor. It’s a luxurious building with a vaulted ceiling inside. It’s not too hot or cold today, but I wonder what the temperature will be like in summer or winter. 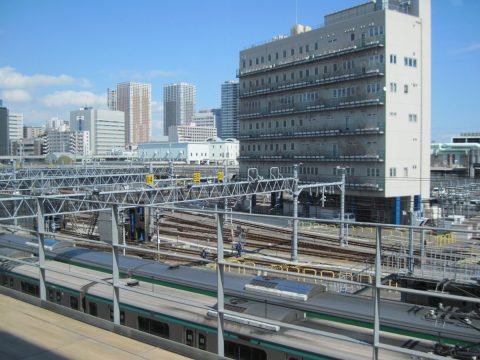 Is the side of the station still a railroad car center?

There are a number of railroad tracks running next to the station. Will this land still be used as a rolling car center? 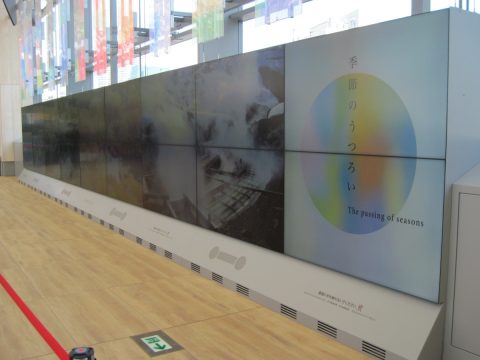 The digital signage, which has recently become more and more popular, created a Japanese taste. 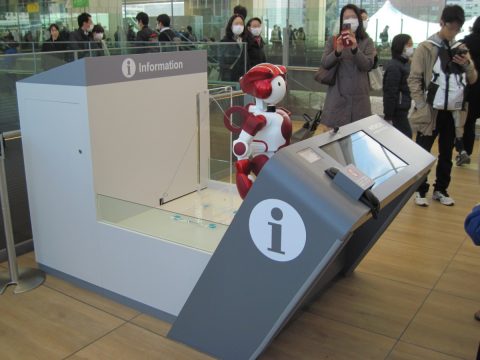 Information was a robot made by HITACHI. To prevent the spread of the coronavirus, the handset was banned. 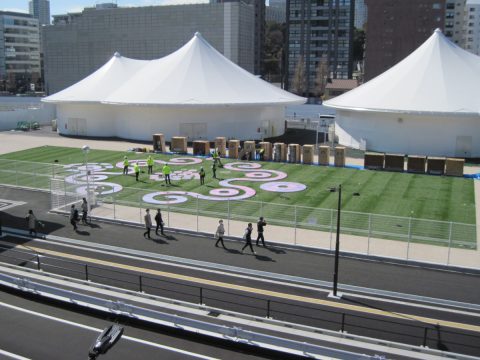 Are they preparing for an event outside? There are circus-like huts lined up. 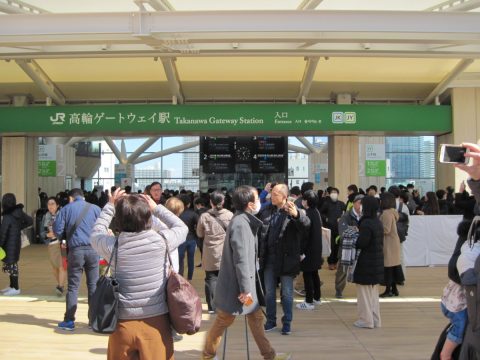 There seems to be only one ticket gate. It only says “entrance,” so it looks like they are not going to build a new ticket gate for the time being.

I couldn’t find any stores in the station. 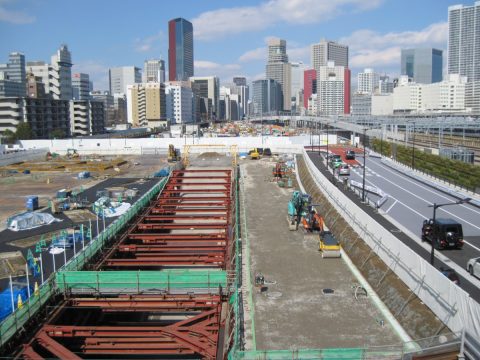 Northwest side of the station under major construction

On the northwest side, there was a large scale tunnel construction going on.

It doesn’t seem to be a railroad, as the tip of the other side of the tunnel seems to be uphill.
There is a road (auxiliary line street No. 322) running just to the right, so I don’t think a road will be built in parallel. If so, is it an underground parking lot? 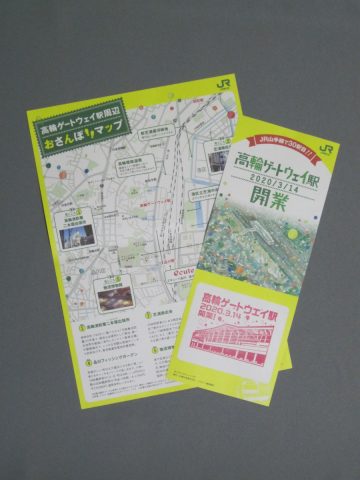 As I exited the station, they were handing out a “Takanawa Gateway Station Area Walking Map.” There was also a place where you could get a commemorative stamp, so I did. 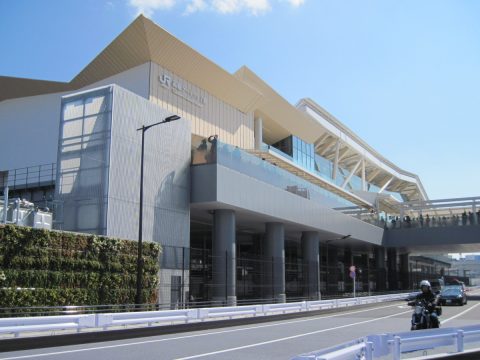 Back near the station again, here is a picture of Takanawa Gateway Station taken from the auxiliary line street No. 322.

Once I was outside the station, I didn’t want to take the train from the same station. I decided to take a walk from here, since I was given a walking map.
The most interesting part of the map was the Takanawabashi Bridge underpass. The map says: “This is a 1.5 meter high path that connects east and west across the railroad tracks. You may not see it again anytime soon!” There was no way I could not go there. 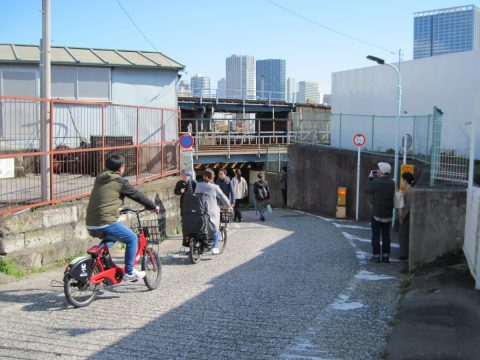 The entrance and exit of the Takanawabashi Bridge underpass was a little difficult to find. However, I found it by following the flow of people, probably because everyone was looking at the walking map. 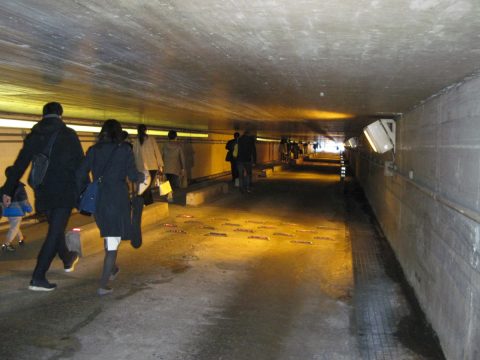 Inside, it’s definitely low. There are a lot of cars passing by. I took this picture from the driveway, but after I finished, I walked on the sidewalk for safety. 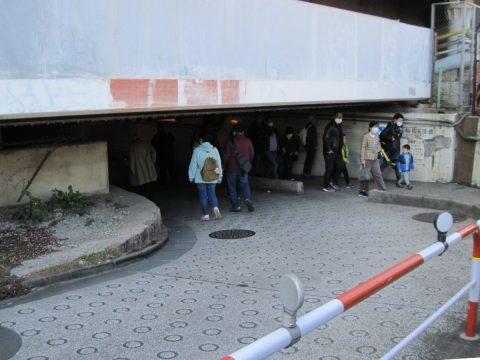 The east entrance and exit looks like this. Both entrances have curves, probably to make the cars slow down.

Instead of going back to the underpass, I decided to take the east side of the tracks towards Shinagawa.

Foundation work for a linear station? 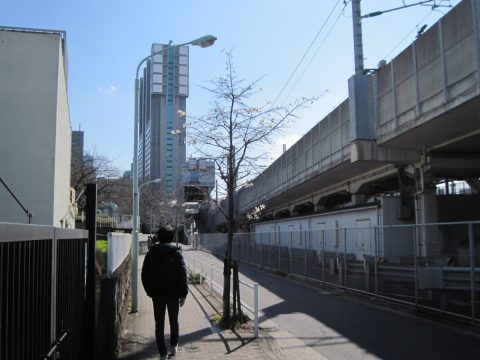 Near the east side of the Takanawa Gateway

I came to the area where Takanawa Gateway Station is located, but I can’t even tell that there is a station.
On the left is the land of the Shibaura Water Reclamation Center. 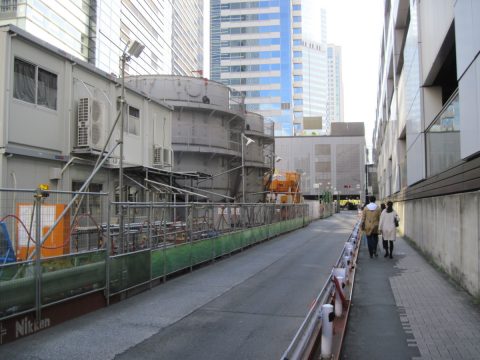 Foundation work for a linear station?

As I approached Shinagawa station, I saw a row of construction machines on my left. Among them was one labeled “Tekkinn-kago-tatekomi-ki”. It was a machine used to build the foundation of the land.
I wondered if they were working on the foundation for the linear railroad station scheduled to open in 2027. 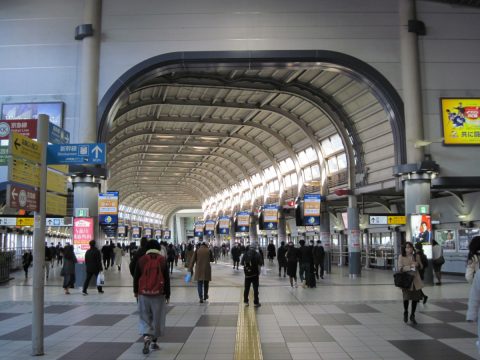 The ceiling of Shinagawa Station also has a geometric pattern when photographed.

I took a lap around the outside of the new national stadium, which was completed yesterday, and also visited the Olympic...

Walking along the Kanda River | Discovering the first autumn leaves after the opening of Shimotakaido Ozora Park! | Takaido - Meidaimae

This time, I walked along the Kanda River from Takaido and found "Shimotakaido Ozora Park". The ginkgo trees were turnin...

I went to the Toyosu market!

Toyosu Market opened to the public today. I decided to visit the market on the first day, thinking that there would be s...

Part of the Takaido Park (tentative name) is scheduled to open in late February 2020. The plan had not changed since Se...

For the New National Stadium, it will be the first sporting event to be held externally I watched the "Final" of the Em...
Walk along Kannana-Dori Ave | Discover Koenji Temple! | Koenji Station Entrance - Honancho
I went to Okinawa for a short trip
ホーム
Tokyo