Starting today, I will intensively walk the Tokaido Highway.

In fact, in 2011, I walked from Nihonbashi to Oiso-juku over three days. At that time, I realized that it would be absolutely impossible for me to walk more than 40km in a day without getting used to my legs beforehand. So, for the past month or so, I have been finding time to walk 20 to 30 kilometers each along the Narita Kaido and Mito Kaido roads to get used to walking.

I had also decided to stay in Hakone, so I booked a hotel in advance.

Today, the first thing I noticed was the “Uiro Honten”, a castle-shaped store.

I arrived at Ninomiya Station, my previous destination, a little after 7:00. I started walking right away. 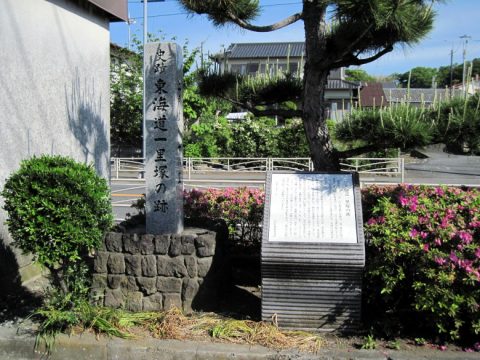 Soon after, I found the remains of Oshikiri-zaka Ichirizuka! It is 18 ri from Nihombashi. In the old days, people spent the second night in Odawara, which is 20 ri away, so on the morning of the fourth day, we still had two ri to go. I was amazed at how fit the old people were. 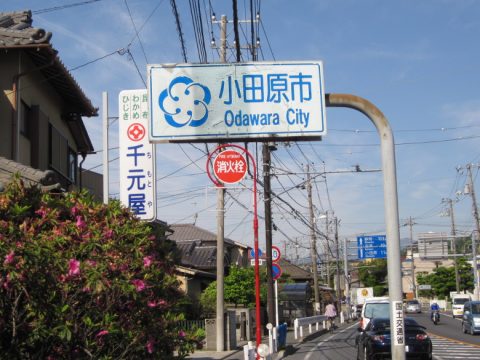 We entered Odawara City around 8:00. 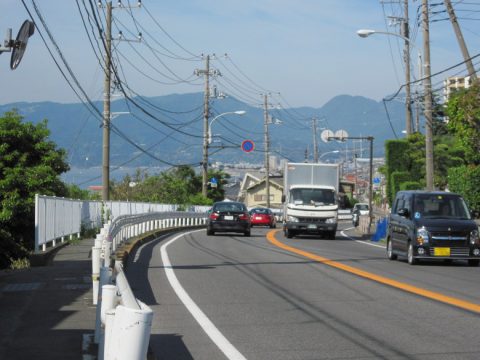 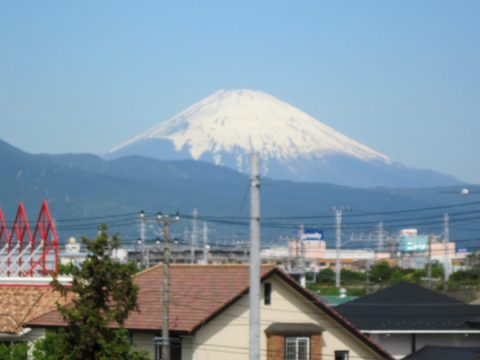 After passing Kozu station, Mt. Fuji was clearly visible. I was expecting to see a bulge on the right side of the mountain, but there was none. After thinking it over, I realized that we were still in Kanagawa Prefecture. 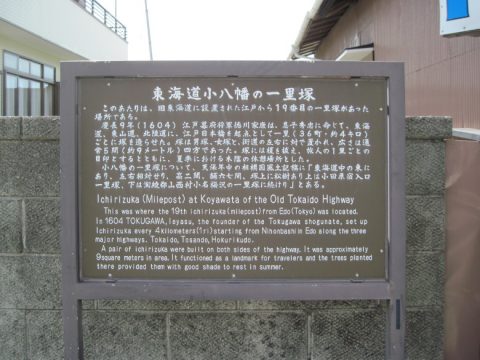 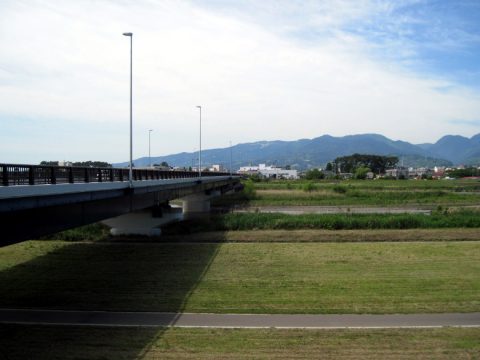 I crossed the Sakawa River. I hoped to see Odawara Castle, as Hiroshige had painted it, but I couldn’t. 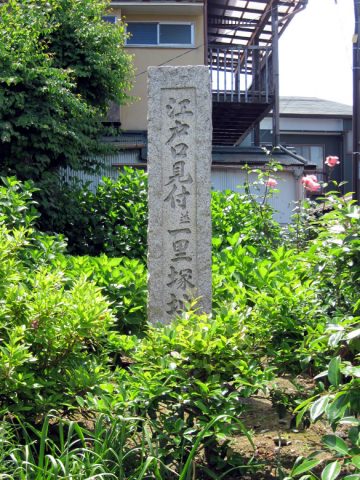 I found the site of an isolated mound (20 ri) in Sannohara! The monument also served as an indication of the Edo-guchi mound. 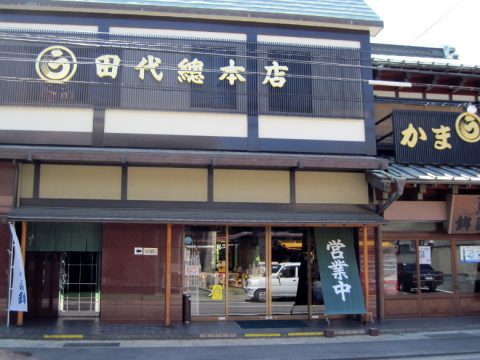 Odawara is famous for its kamaboko. So this is where I found the Maruu-tashiro General Store, the most highly regarded of them all in my opinion! I stopped going in because it looked like I wouldn’t be able to eat all the fish cakes even if I bought them, and I felt bad if I came out just to look at them. 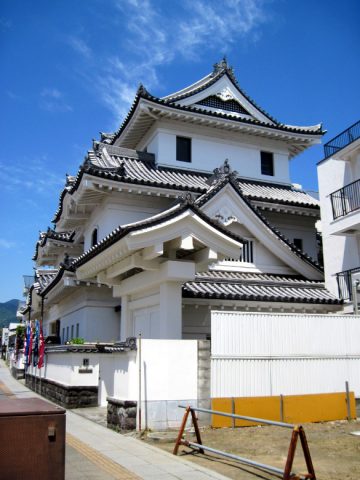 I found the “Uirou Honten”, which looks like a castle! It looks brand new and shiny.

It is said that the medicine called “Uiro” is only sold to regular customers, so I entered the store with trepidation and ordered two boxes of 1,000 yen medicine. When I ordered, I asked about the prescription and its benefits, and he explained it to me as if it were water on a standing board. He spoke so fast that I could hardly understand him.

I’m sure they knew that I wasn’t a regular customer, but they sold me the product as usual.

(I gave both boxes to someone else, so in the end, I only had one grain in my mouth. It was like a Jintan of about twice the size.) 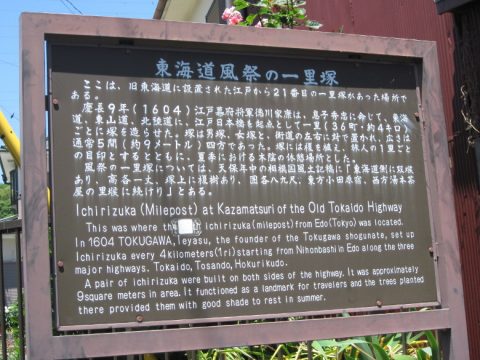 After passing through the JR guard, the mountains become closer. That’s when I found the remains of Ichirizuka at Kazamatsuri!

About 500 meters before Hakone-Yumoto Station, turn left at the Sanmaibashi Bridge and finally start climbing. 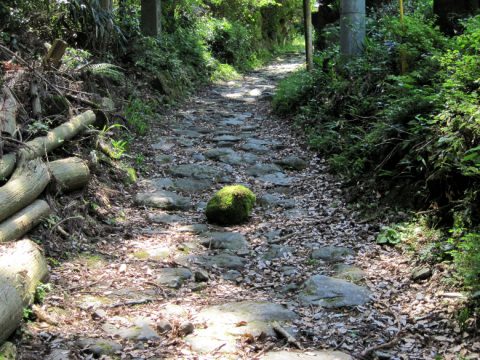 The cobblestone pavement continued intermittently from the hot spring lodges lined up about 1.5 km from the Sanmaibashi Bridge. The cobblestones seemed to have been made using advanced civil engineering techniques, and there were many signs with explanations. 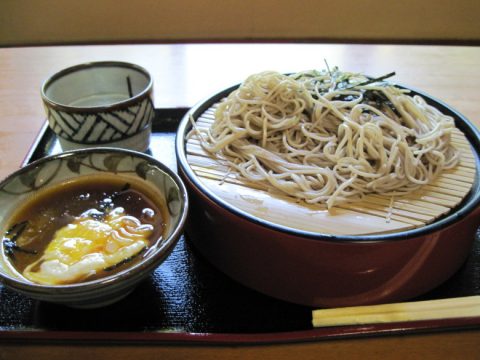 For lunch, we went to Kikyo-ya in Hatajuku and had a delicious bowl of tororo soba, which was described as a specialty. I was so thirsty that I had to have another cup of tea three or four times. 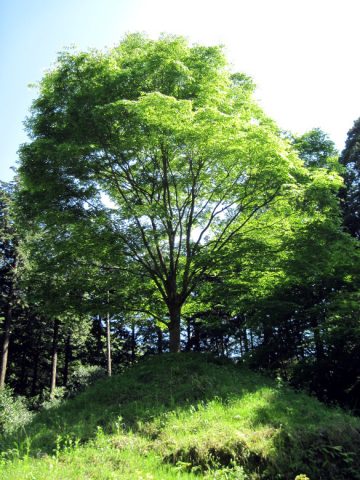 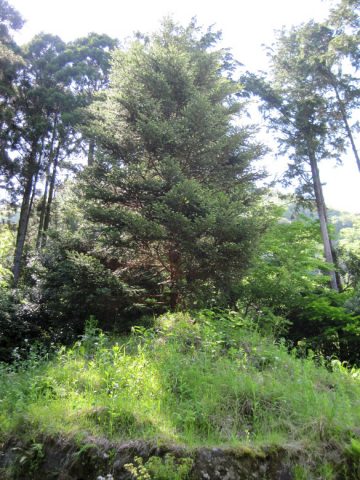 The Ichirizuka in Hatajuku is a reconstruction, but it is magnificent. The left one was planted with zelkova and the right one with fir. I am not familiar with the type of tree, but it seems to be the same species after the restoration. 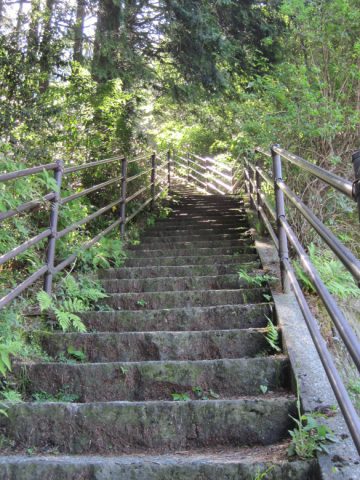 It is said that there were many steep slopes on the east side of Hakone. However, since they have collapsed, many of them are now stone stairs. The photo shows the slope of Kashi-no-ki-zaka (oak-tree slope), which reads, “If you creep up the slope of the oak tree, it will be so hard that you will cry tears the size of acorns. It is true that the acorn is a teardrop-shaped acorn, so it is a well-written poem. Yes, I climbed the slope while spilling tears from acorns, too. 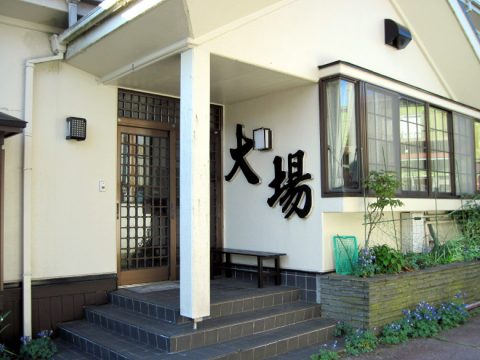 I arrived at Oba, a guest house specializing in overnight stays, before 5:00 pm.

Although it was about 300 meters away from the Tokaido Highway, the inn was very clean and neat.

I would like to stay there again in the future if I have a chance to stay overnight in Hakone.

As the sun was still high in the sky, the innkeeper recommended that I visit the Hakone Shrine. The atmosphere was solemn.

There are still traditional old townscapes in places along the major highways. Today, I came across a beautiful town cal...

Eating specialties is one of the pleasures of walking along the highway. Today, I ate Abekawa Mochi and Tororojiru. ...

Walking the Tokaido – Discovering that Koushizaka is a tunnel of bamboo grass! | Hakonejuku-Yoshiwara-juku

Hakone Road is fun to walk, with its ups and downs and great scenery. The most impressive part was the tunnel made of...

Walking on the Tokaido | Discover the Oiwake of Hinaga! | Kuwana – Shono

Hinaga no Oiwake is the junction of the Tokaido Highway and the Ise Sangu Road. Yajirobe and Kitahachi of Tokaidochu Hiz...

I took it a little easy today. I always walk from Tokyo to Nagano, but today, I walked in the opposite direction. As ...

When I was a child, I had a full set of Nagatanien's Fifty-three Stages of the Tokaido cards at home. Since then, I have...
Walking along Mito Kaido | Discover the Katsushika Bridge on the Outer Ring Road under construction! | Nijuku – Kogane
Walking the Tokaido – Discovering that Koushizaka is a tunnel of bamboo grass! | Hakonejuku-Yoshiwara-juku
ホーム
Kanagawa